So what with having to go to work this week I have messed around at a few things. This is the first bit of spinning I have done in a while. I started it when I was at my sister's a few weeks ago and finished it at the weekend. It was a blended berry coloured roving from Sarah's Texture Crafts. 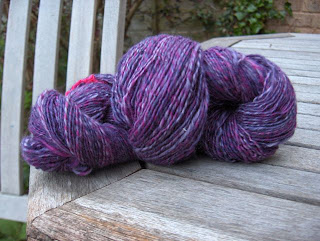 This one is just playing around with layers; white underneath which is then exposed by pulling holes in the coloured layer over the top when it is partly felted. I think it will be more effective the other way round. I will probably try some other combinations. But it is quite pretty and now acting as a mat in the middle of the kitchen table. 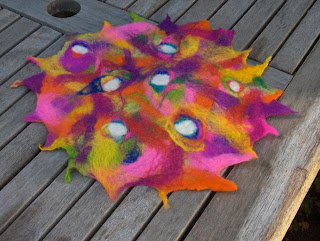 Then I spent a while doing some blending. I bought a nice stash of colours a while ago but they are all very vibrant and I wanted to make some more muted colours, so I used a pair of mini carders and created some little rolls blending different colour combinations. Some started out with just two but then I started adding little bits of several colours. It is quite fun, you don't get a new colour exactly,because of course you can see the strands of the different coloured fibres but the overall effect is very pleasing. I particularly liked blending dark colours with a bit of white. 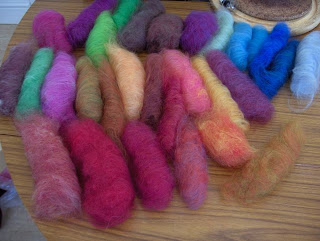 A lovely new bag of undyed roving arrived as well so then I took some of the blended colours and decided to do a bowl round a circular resist. This is the spiral pattern laid out, wetted down and partly rolled: 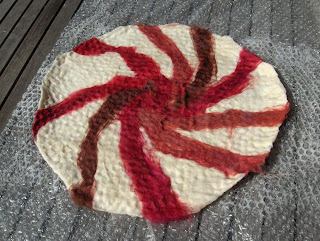 However it did not shrink anything like as much as I expected, so it ended up as a beret instead. Something else that requires further experimentation 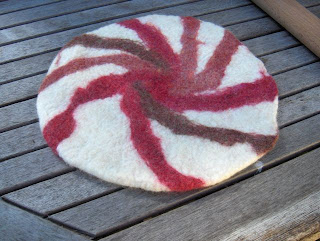 As usual it fits M ... and anyway she is the hat person in the family. 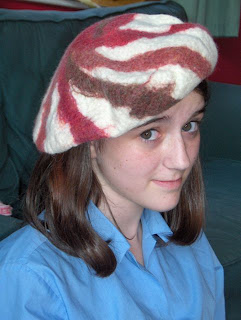