Tish had her college prize giving day today. She was awarded a National Diploma in Animal Management at Distinction level. I am very proud of her. It has been a hard two years for her, especially the three hours a day she has spent traveling back and forth. It was a very dull ceremony, marked by the man with a very thick neck sitting right in front of me and a horsey woman who did the shaking hands with all the students and who definitely should not take up public speaking. 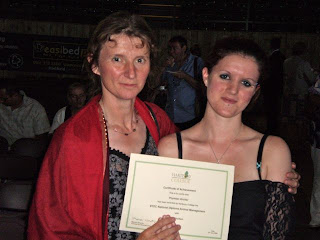 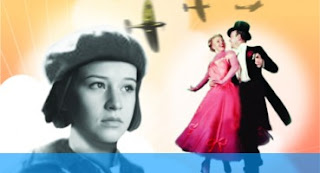 M is appearing tonight in her first (of many, I hope) professional stage performance. She goes to the Youth Musical Theatre group at Chipping Norton Theatre and they were asked a few weeks ago if any of them were interested in participating in a performance with the Oxfordshire Theatre Company. So she jumped at the chance (or did I push her?), and having had a couple of rehearsals to learn the songs a group of ten of them will be appearing tonight, then Wednesday and Thursday this week in Dancing in my Dreams by Neil Duffield. She is having to wear a very ugly brown dress but I insisted she must get a photo as she will want a record of everything she appears in over the years to come. I will try and nag her into blogging about the experience but having got her signed up a few months ago to Blogger I have yet to persuade her that it is a fun way to record and share what goes on in your life.
Posted by martine at 16:35