The girls and I have been on a road trip, to try out some new things, and to revisit some old favourites. We started the week with a trip to Go Ape. I found a leaflet for this ages ago and have been dying to have a go, so this was top of my list, and probably the best day of the week. We opted for the early session, and it was a good move as we were the first people round the course. It is basically a high rise assault course, about 25 feet up in the trees, with rope bridges and zip wires. Tish couldn't do the tarzan swing at the end, but I was determined not to chicken out of anything. Here are the girls up one of the first trees: 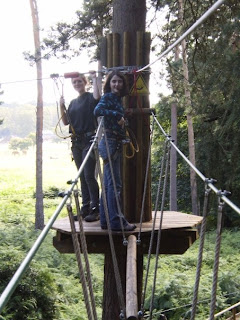 and here is me crossing a bridge. It was very safe, we were well fastened to the tree all the time with a harness. I was sorry to get to the end and wanted to go round again. There is a film of us all coming down a zip wire, will try and get it uploaded. We went to the safari park in the afternoon, but don't need to add any more photos of cute monkeys, I'm sure Tish will put them on her blog. 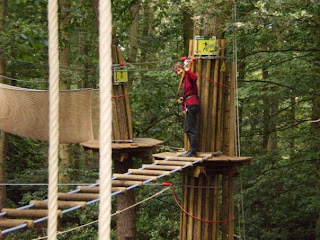 Monday we drove on up to Rutlandwater, where we picnicked and walked and found a very nice campsite. 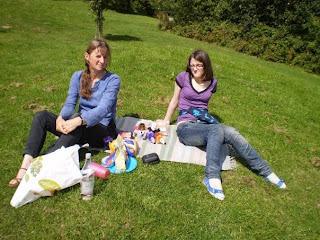 Tuesday we drove over to the Peak district via the not-so-picturesque village of Gotham. The girls found it on the map and insisted we had to visit. 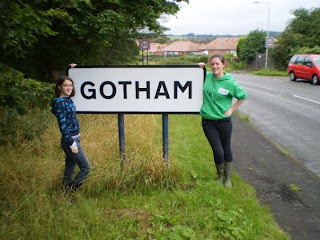 We stopped briefly in the town of Matlock Bath where we found a lovely hippy shop and bought hoodies for Tish and me, and picked up a leaflet for the Otter and Owl sanctuary. Equally we don't need photos of otters (or even the scottish wild cats, which were lovely) but I just had to stop by and pay my respects to 'Don' (in the dog cemetery.) 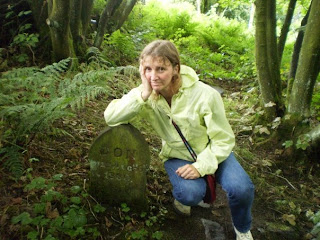 Tuesday night we drove all the way across to Manchester to stay with the Ridley Birks, and Wednesday Tish and I went to Chester Zoo with C and M. We did take a lot of photos of the animals but not of the people (if you're family you can see all the animal photos on Tish's facebook page). M didn't come to the zoo but spent a nice day out shopping and trying on expensive dresses with R but I didn't get to spend much time with Julie, so we have to go back again soon. Wednesday night we spent a few hours in A&E after Tish scalded her arm, which did put a bit of a downer on the visit.
Thursday morning we set off for the east coast. M had wanted to sleep on the beach and watch the sunrise. We went to Scarborough (after sitting in our first traffic queue for over an hour), where we had ice cream on the beach and took a ride around the bay in a very silly pirate ship, then went and stayed on a very expensive campsite, where they put us in the bottom field that was already waterlogged before it began raining all night. We got up at 4.30, bought chocolate at the 24 hour Tesco and drove down to the sea front in the dark. Unfortunately, though the rain let up and the walk along the beach was fun the cloud cover was so heavy there was not the slightest hint of a sunrise, it just got gradually lighter. Two local girls had also chosen that morning for an early start and were in the sea in their bikinis at 5am. We walked around to the sea wall and then went back to the tent where the girls slept again for a couple of hours before discovering the bedding was somewhat soggy. 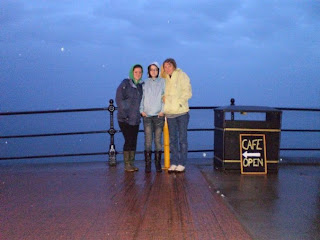 Friday was also a frenetic day with our only other prearranged trip. By 11am we got to Brimham Rocks, which are just up the road from Harrogate where we used to live and were we used to visit all the time when the children were younger. They are owned by the National Trust and are a series of large rock formations on the moors above Nidderdale. They overlook Menwith Hill which is an American listening station and you can see the 'golf balls', which protect the satellite dishes, in the distance from the higher rocks. 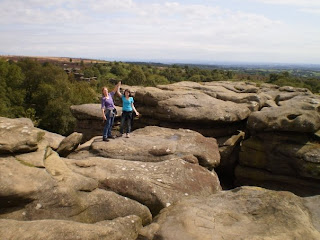 Then we jumped back in the car to go to Forbidden Corner. We visited once or twice when we lived here, though it has got much more popular in the intervening years and now you have to book in advance. It is one of those places that are impossible to describe. It is not exactly a garden, not a theme park, not a sculpture park, but has something of all these things. There are lots of things that squirt water at you, lots of secret passages, singing mice, grunting skeletons and a silly graveyard. Here are the girls at one of the entrances to the underground passages: 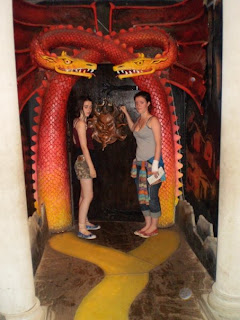 After all the walking and climbing we headed off to Newcastle, to Lewis' house. Rachel has just moved in with him, and in a couple of weeks Jacob is moving in to their spare room to go to college in Gateshead. This was the first time I have ever stayed as a visitor with one of my kids. It was nice to see them all domesticated. We spent Saturday morning doing the reptile shops, and the whole afternoon rearranging the vivariums in the living room, after Lewis found a nice second hand 5 foot viv for Sartre (their new snake, or rather one of the new snakes). So from the top we have: Sartre (common boa) and Squidge (bearded dragon), next row: Ozzy (water dragon) and Midge (boss monitor lizard, he's a baby right now but will be 4 foot+), bottom row: Krox (blue tongued skink) and Spike (5 foot corn snake). And there is a little empty one in the middle that Rachel wants to put a ball python in. 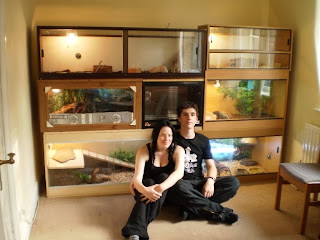 Sunday M and I drove over to pick up her friend E and we went to Wet and Wild. Tish couldn't come because of her burn and she bussed into town to meet an old school friend. I copied the wrong directions from their website, not really having much idea which direction we were supposed to be coming from, so this was a real magical mystery tour as we drove round for a bit, looked at the map, drove round a bit more, had to go through the Tyne Tunnel and negotiate some nasty roadworks, then finally spotted the brown tourist signs for Wet'n'Wild. M and E disappeared right away so I spent my time sitting in the jacuzzi, went down a couple of tame slides and then got dressed. I was glad to have a local in the car when we made our way back through the middle of Newcastle to pick up Tish. Then we went back to Dunston to drop M at her dad's house, then Tish and I had the four hour drive home.
It's funny how sometimes you feel like you need a holiday to recover from your holiday:-)