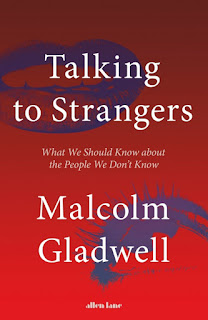 This books starts with the story of Sandra Bland. A young Black woman is stopped by a policeman, an altercation ensues and she is arrested. Three days later she killed herself in the police cell. This book goes beyond the endemic racism of the police to look more widely at the way human beings fail to understand each other in all sorts of important ways.

The book takes us through some historical examples, Chamberlain's 'getting to know' Hitler, and the CIA's work in East Germany, to show that human beings, despite their best efforts, fail to understand others or see the truth. There is a long section on intelligence work against Castro's Cuba and how the CIA's top Cuban advisor was a Cuban agent for decades. Then he moves on to the rapes and the child abuse cases. It makes your blood boil and I found it quite a hard read, the descriptions of how people (men) got away for decades with systematic abuse, all because of the way that people 'default to truth', assume that whoever they are talking to is truthful. He describes at length the Amanda Knox case; a young woman who didn't act the way people thought she should and ended up in prison because of it. The examples are interspersed with descriptions of psychological experiments that examined the situations being described.

"But the harder we work at getting strangers to reveal themselves, the more elusive they become. Chamberlain would have been better off never meeting Hitler at all. He should have stayed home and read Mein Kampf. The police in the Sandusky case searched high and low for his victims for two years. What did their efforts yield? Not clarity, but confusion: stories that changed; allegations that surfaced and then disappeared; victims who were bringing their own children to meet Sandusky one minute, then accusing him of terrible crimes the next.

James Mitchell was in the same position. The CIA had reason to believe that Al Qaeda was planning a second round of attacks after 9/11, possibly involving nuclear weapons. He had to get KSM to talk. But the harder he worked to get KSM to talk, the more he compromised the quality of their communication. He could deprive KSM for sleep for a week, at the end of which KSM was confessing to every crime under the sun. But did KSM really want to blow up the Panama Canal?

Whatever it is we are trying to find out about the strangers in our midst is not robust. The 'truth' about Amanda Knox or Jerry Sandusky or KSM is not some hard shiny object that can be extracted if only we dig deep enough and look hard enough. The thing we want to learn about a stranger is fragile. If we tread carelessly, it will crumple under our feet. And from that follows a secondary cautionary note: we need to accept that the search to understand a stranger has real limits. We will never know the whole truth. We have to be satisfied with something short of that. The right way to talk to strangers is with caution and humility. How many of the crises and controversies I have described would have been prevented had we taken those lessons to heart?" (p.261)

The second part of the book looks at the Kansas City experiment, an experiment in policing style to prevent crime by visible police presence. This led to a policing practice that allowed police to stop people on the mere suspicion that they were doing something wrong, and then search the person or the vehicle for weapons. When confined to specific areas of high crime the practice appeared to have a dramatic impact, but what ended up happening was that it was taken up and applied across the board, and this brings the book back around to Sandra Bland. She was stopped precisely because of an over-enthusiastic application this policy. It was the opposite of the 'default to truth' problem in the first half of the book, a 'default to guilt', a policy that assumed everyone you might encounter was up to no good. This was a fascinating book that gives much pause for thought and reflection on how humans communicate and understand each other.

"This book is about a conundrum. We have no choice but to talk to strangers, especially in our modern, borderless world. We aren't living in villages any more. Police officers have to stop people they don't know. Intelligence officers have to deal with deception and uncertainty. Young people want to go to parties explicitly to meet strangers: that's part of the thrill of romantic discovery. Yet at this most necessary of tasks we are inept. We think we can transform the stranger, without cost or sacrifice, into the familiar and the known, and we can't." (p.342)

I know that I have a strong tendency to trust people and take them at face value, then a little incident happened a few weeks ago at work. A young man came in to collect his parcel. He had come on his bike and his P739 card had dropped from his pocket. I am usually most helpful in these circumstances (other of my colleagues are more sticklers for the rules) and I found the packet and checked his ID. Later in the day a man came in with a card, and when I asked him for ID he said he had lost it all in a house fire. I said I could send the packet back out to his house for him, but when I searched the packet I found it was the one that the young man has collected that morning. The man mumbled something and exited very promptly and as he left I realised he had probably found the card on the road and decided to try and steal it. It disrupts my sense of humans as mostly good people, and I then try and be more strict, and then will feel mean for not being helpful, and then I remind myself not to beat myself up about stuff and go back to trusting.