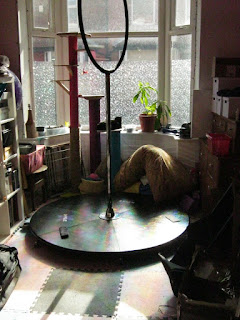 Apparently it is Mental Health Awareness Week and while I try to be very honest on this blog the temptation is to write about the nice things so that life seems good to anyone looking in. I know that social media generally is guilty of people presenting a glossy image of themselves, which mostly serves to make others feel inadequate. Life is messy. Here is my messy life. Monkey is stressed about her Japanese oral exam this morning so we were sitting watching the cat catch fungus gnats (more on that later) and just looking at the dumping ground that is our front room, now dominated by a Lollipop that Tish bought recently, but also full of volleyball nets and random floor cushions that we never sit on.
The back living room is just a tip too, but you know what, I don't beat myself up about the fact that it needs a good tidy and a hoover. I feel bad that I threw out the cat castle this morning, but she had lost interest in it and it was just taking up space. 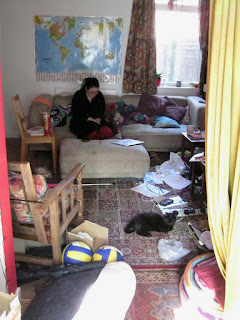 My joys are small these days and this gave me joy today. While we were sitting I looked up and found this rainbow cast in the ceiling by the window screens that refract the light: 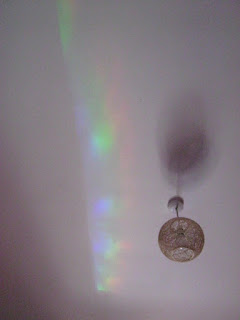 So, anyway, back to the fungus gnats. They had become endemic in the kitchen, and it was time to tackle them. All the babies have been potted up and the old compost put in the compost bin. All the new compost has had the diatomaceous earth added, and I put more in all the other plants around (mainly the avocado trees), this kills the grubs as they hatch apparently: 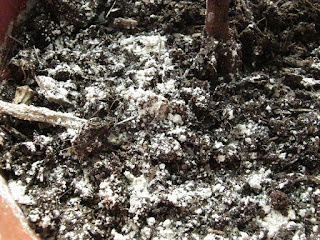 The drosera capensis was so well fed that we swapped it with the one upstairs (look close you can see how smothered in gnat corpses it is): 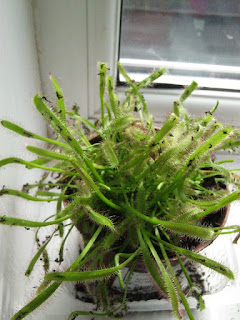 and we added new and extra gnat traps (which I would recommend, they have been very effective and cheap): 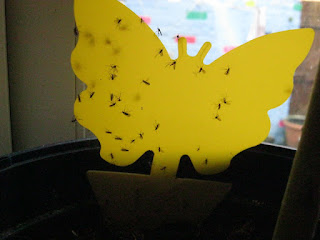 This morning there was nary a one flying in the kitchen, so I call that a job well done.
Monkey just came down the stairs and said 'your friend Nick is on the news', and so he is. Here is one of his videos that he makes about sea kayaking, including a recent magical encounter with dolphins:
Stay safe. Be kind. Find small joys (and share them).
Posted by martine at 10:03