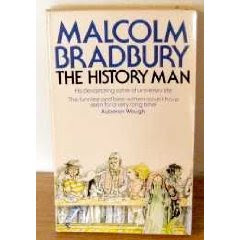 I have joined a group on Ravelry to read 52 books in 52 weeks. It is quite a tall order and I guess it may lose momentum but it is good to start the new year with intentions to use my time more constructively.
The first book I finished the other day was The History Man by Malcolm Bradbury. I read it for a book group that I go to in Stow. Part of going to the book group for me was to get ideas from other people and read books that I might not have chosen to read otherwise. This is definitely one of those. It is a real period piece, having been written in the early 70's. It was made into a TV series that I watched as a teenager so I found much of the story was familiar as I was reading. It is a very conversation driven book. It takes place in a very brief period of time and the whole plot takes place through the conversations, which are very densely written and sometimes confusing to follow. The atmosphere is very well created through these conversations, and the intricately described party preparations. I might have found the level of detail annoying in another book but it was an essential element of how you understand the characters and their motivations. I guess it is primarily about Howard; I liked him in spite of myself really, because he is quite a misogynist but you can forgive him because it is the 1970's. He appears to be provocative just for the sake of it, to sit back and watch the effect that his words and actions have on people, as if he is doing some kind of social experiment, but in some ways this seems like rather immature, attention seeking behaviour. You can't help but read books like this from the perspective of today's attitudes and it is quite interesting to see how much they have changed. Bradbury's main focus is the change that had been happening (and continues I suppose) in society's attitude to sex and relationships, as seen through the relationship between Howard and Barbara. I don't think he was trying to make a case for 'open' relationships, but to try and show how one might work and how it might effect people. I was left with the feeling that that particular relationship was not a very healthy one and not based on real communication or openness. But the book is a social commentary more than anything else, a sociological study taking place in a sociology department, through the eyes of a sociologist. And then Mrs Thatcher came along and said "There is no such thing as society", so you don't find novels that do this very often nowadays.
Posted by martine at 14:05