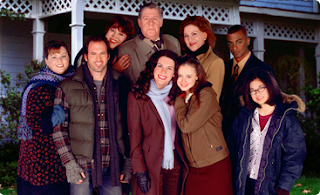 ...... drink two glasses of wine with lunch.
This was my best laugh of the day today. You had to be there I suppose. We watch a lot of an american drama called Gilmore Girls, and this comment came from the grandfather, responding in disgust to his wife who was threatening to take herself off to Europe without him and have two glasses of wine with lunch (every day!) It is kind of a follow on from my previous post on the subject of changing attitudes. The programme's funniest moments come from the differences in attitudes and expectations between the grandparents (who are incredibly wealthy) and the daughter and granddaughter (who are kind of more normal, except of course that everyone on american telly is affluent).
Other than watching Gilmore Girls (while waiting for M at Youth Drama Group) I have had a pretty productive day. I iced the Christmas cake. Compared to last year this was pretty well done. Last year the Christmas cake became my parents wedding anniversary cake in May. I like to think that the mere fact I make a home made Christmas cake means more than the fact it doesn't get to be eaten at Christmas. Anyway everyone knows a good fruit cake needs to mature for a couple of months.
Posted by martine at 19:06