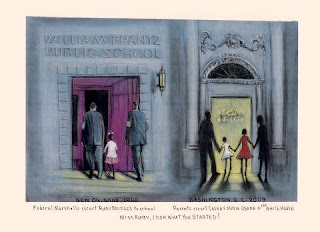 I am sitting sewing again today but with the television on beside me, watching the build up towards the inauguration of Barack Obama. It has been reminding me of the day spent waiting for the release of Nelson Mandela from prison. We spent several hours just watching people gathering, anticipating. It also has something of Princess Diana's funeral about it, lots of people driving around in black cars and people talking about how important it is for them to be there.

I think you can't help but get caught up in the sense of occasion. I hope, really hope, that he lives up to all this expectation.
My dad sent me this image, done by a friend of a friend, I will try and find out who. I think it can speak for itself.