Well, I came home rather ill yesterday but thought I would post today about my first ever totally blind delivery. That's what they call it when you have had absolutely no training on a duty whatsoever and are just expected to find your own way round. To be fair I did have a lovely little map which one of the blokes drew for me, and a couple of people took bits of the round. I don't know Winchcombe at all so was a little daunted, but I like to think that after six years I can put up with anything that the job throws at me. So after walking round North Street I set forth with a very heavy trolley. 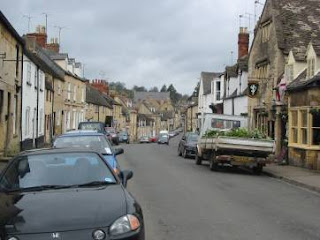 It was pretty straight forward and things were going ok until about half way round the lid of one side of the trolley slammed shut and refused to open again. There was only two small bundles left in there so I didn't worry too much thinking I could get it open back at the office and pop back in the car with what was left. I did fail to consult the map at one point (this is me being cocky and thinking I know what I am doing) and missed the end of one road out so had to go all the way back down and back up a very steep hill (not fun, there are no hills in Moreton so I'm just not used to it). I was struck with the feeling that they are a pretty superstitious lot on Winchcombe as I don't think I encountered a single number 13 all day. By the time I was at the start of the final stretch I could feel a migraine coming on. I spent an irritating five minutes searching for a bundle that started with number 64 only to guess that someone else must have taken that bit so set off in the other direction. As I made my way zig-zagging down the road I found number 89 was confusingly right next door to number 65, and 43 was well hidden, round behind a garage and up some steps. Luckily when I was standing opposite what I hoped was number 15 (it was next door to number 17 but you can't take these things for granted) one of the blokes turned up in a van to see how I was getting on. Back at the office a while later I was holding the trolley steady while the post office man tried to smash the lock open with a hammer and chisel, without success. So I left a note and hope that someone would manage to find a way in to it the next morning. And it was rather a relief to find that my car, which had been in a one hour waiting zone all morning, didn't have a parking ticket.
I would have been feeling pretty pleased with my achievement if I hadn't spent the rest of the day in bed with a disgusting sick headache.
Posted by martine at 14:04