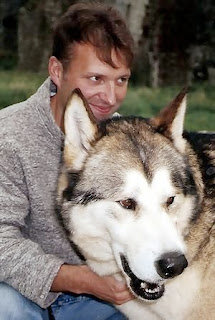 The Philosopher and the Wolf by Mark Rowlands. This book was mentioned a while ago by Yvette on Felting your Soul and I was intrigued (her blog is in dutch but you can get a terrible google machine translation if you click the picture at the top). Again it is nice to be able to say that I have never read a book quite like this one. It does what it says on the tin; it is about a wolf, with some philosophy thrown in. No, that is not fair, it is much more than that, but it's quite hard to put your finger on what it is. So this philosopher buys this wolf cub. Now you have to be a strange kind of person to do this in the first place, and he admits he didn't have an awful lot of time for human beings. The book is about Mark and Brenin, and how their relationship impacts on his life, both in a real practical sense but also in a philosophical sense. It made me laugh out loud, and I always consider that a good thing in a book. I guess you can't ever own such an animal without it becoming the centre of your existence, a wolf does not sit quietly while you get on with life, and this one didn't even like to be left alone for a moment, somewhat impractical if you are a university lecturer. So he lives a life amongst students, where Brenin sleeps in the corner of the lecture theatre and Mark struggles to maintain some kind of physical superiority over him. I loved the bit that described going for runs in an attempt to tire Brenin out, runs that got longer and longer as the wolf got fitter and fitter. After some years of this he then takes himself off to Ireland and basically becomes a recluse, writing philosophy books, and living with Brenin, joined later by Nina (a Malamute/German shepherd cross) and then Tess (one of Brenin's only litter of pups). In amongst their story are scattered Mark's reflections on the nature of human beings as compared to wolves, the nature of human society and morality. It is almost as if the years he spent with the wolf led him to think in a different way about life, the universe and everything. And he comes up with a much better answer than '42'. They lived together so closely that he comes to see existence from a wolf point of view and it helps him to understand what is missing from how humans live. The best chapter title is definitely, "The Pursuit of Happiness and Rabbits", in which he looks at the way people seek 'happiness' as if it were a thing, when they should be chasing rabbits with the enthusiasm that his animals do (and incidentally also do so relatively unsuccessfully.) And then during the year they live in the south of France Brenin falls ill. Through Mark's fierce determination and dedication he recovers and they have a grace year before the cancer catches up with him. It is almost as if it is Brenin's death that brings together the understanding that he has been developing into the big question of 'the meaning of life'. It is interesting how he makes his case because he lays out a variety of well examined philosophical arguments and then tears them apart to see what is wrong with them, to look at the underlying but unacknowledged assumptions about human nature. I liked his conclusion because it is not upbeat or simplistic. It is a challenging read, he does not have a very positive view of human nature and can be pretty tough on how people relate and behave to each other. Although he knows that the mere process of being a 'philosopher' makes him "existentially deracinated" (that's 'pulled up by the roots')(and that's me enjoying being pretentious) he does come across as remarkable well grounded. He does not say 'go out and find your own wolf' but that is kind of what he means.