Rooks on the radio 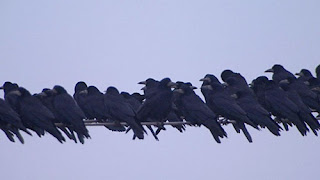 Listening to the radio in the car yesterday and they were talking about rooks and some bird expert came on and gave this piece of advice on telling the difference between rooks and crows:

"A rook on his own be a crow, and a group of crows be rooks"
I had a bit of a nostalgia moment, and if a blog is for nothing else it is for personal recollection. When my older son Lewis was a toddler we lived in the village of High Pittington in County Durham (not linking to Wiki for a change as they had nothing), and if you asked him what noise a bird made (this is the kind of conversation you have with children just learning to talk) he would not say 'tweet tweet' or 'cheep cheep', he said 'Aaaak', because the only birds we had in that village were rooks. They inhabited the roof ridge of the shop across the road, occasionally circling the village and aaaak-ing. I think maybe there were so many of them that they just intimidated all the smaller birds. That's all really. It just made me smile. And don't get me started on jackdaws, they walk sideways, and M used to do the most excellent impression of them when she was little.
Posted by martine at 17:31