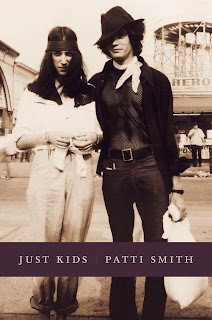 I cannot now recall where I read about 'Just Kids' by Patti Smith but I requested it from the library partly because Julie bought me a copy of 'Auguries of Innocence' for my birthday and I was curious to read about her background. My first thought was 'Oh Patti Smith wrote poetry too', when in reality she was a poet and artist who just happened to get into rock music, not that I know anything much about her music either, she's just one of those iconic figures who's name is familiar.

While this book is an autobiography it is also a homage to her relationship with Robert Mapplethorpe. The book begins at age 20 when she has an illegitimate child and then leaves her quiet home town in search of a new life. She and Robert meet when she is living rough after moving to New York and fall almost at once into a mutually reliant and closely trusting friendship that endurs the rest of his life. At some points during their lengthy cohabitation they seem to consider themselves a couple but Robert's ambiguous sexuality meant that this was not a vital part of what bound them together. The story follows them from the late 60's through to Robert's death in 1989. They end up living at the Chelsea Hotel, which was the hub of cultural creativity over a period that extended into the 80's, many well known artists, writers and musicians making camp there. So her story is also their story; anecdotes of chance encounters and developing friendships with some of the 60's most iconic figures are scattered though the book, but so unself-consciously, because at the time she was quite wrapped up in her own work and supporting Robert that she seems almost unaware of what she becomes part of:

"I loved this place, its shabby elegance, and the history it held so possessively. There were rumours of Oscar Wilde's trunks languishing in the hull of the oft-flooded basement. Here Dylan Thomas, submerged in poetry and alcohol, spent his last hours. Thomas Wolfe plowed though hundreds of pages of manuscript that formed You Can't Go Home Again. Bob Dylan composed 'Sad-Eyed Lady of the Lowlands' on our floor, and a speeding Edie Sedgwick was said to have set her room on fire while gluing on her thick false eyelashes by candlelight.
So many had written, conversed, and convulsed in these Victorian dollhouse rooms. So many skirts had swished these worn marble stairs. So many transient souls had espoused, made a mark, and succumbed here. I sniffed out their spirits as I silently scurried from floor to floor, longing for discourse with a gone procession of smoking caterpillars." (p.112-3)

She seems to me to represent in many ways the changing attitudes to sex and relationships of that period. She relates honestly, without romanticising, the years they spend in relative poverty, struggling to provide for themselves and how she then chooses to support Robert financially, working mainly in bookshops, because she is so passionate about his creativity. They live together but are often drawn into relationships with other people, with no hints of possessiveness or feelings of betrayal. She writes here unsentimentally of her brief relationship with Jim Carroll:

"Jim and I had some very sweet times. I'm sure there were downs as well, but my memories are served with nostalgia and humor. Ours were ragtag days and nights, as quixotic as Keats and as rude as the lice we both came to suffer, each certain they originated from the other as we underwent a tedious regimen of Kwell lice shampooing in any one of the unmanned Chelsea Hotel bathrooms.
He was unreliable, evasive, and sometimes too stoned to speak, but he was also kind, ingenuous, and a true poet. I knew he didn't love me but I adored him anyway. Eventually he just drifted away, leaving me a long lock of his red-gold hair." (p.167)

She must have kept diaries during this whole period because she writes in such detail about their lives, specific items they owned, how they dressed for special occasions, conversations held and events witnessed. The book has a wonderful atmosphere, recounted so informally as if you are just sitting talking about things that happened quite recently, as if you are discussing shared acquaintances. She is both unpretentious and at the same time very reverential towards people she considers to be cultural 'greats', and duly appreciative of their influence on her life and career. Her writing and performance of her poetry eventually leads her towards music, and her and Robert's lives begin to take different paths, though he is the person she comes back to for the important events:

"There was never any question that Robert would take the portrait for the cover of Horses, my aural sword sheathed with Robert's image. I had no sense of how it would look, just that it should be true. The only thing I promised Robert was that I would wear a clean shirt with no stains on it.
I went to the Salvation Army on the Bowery and bought a stack of white shirts. Some were too big for me, but the one I really liked was neatly pressed with a monogram below the breast pocket. It reminded me of a Brassai shot of Jean Genet wearing a white monogrammed shirt with rolled-up sleeves. There was an RV stitched on my shirt. i imagined it belonging to Roger Vadim, who had directed Barbarella. I cut the cuffs off the sleeves to wear under my black jacket adorned with the horse pin that Allan Lanier had given me." (p.249)

What an interesting book, and not what you might expect from a rock legend. Patti Smith is a totally fascinating person, intellectual and self-educated, interested in everything. Someone who lived through, benefitted from, and became part of a cultural revolution, and yet is very down-to-earth and ordinary in many ways. I loved the book because it lived up to some slightly romantic notion that I have of the 60's, a nostalgia for something that I missed out on, and she paints a very vivid portrait of the times, allowing you an intimate glimpse of a world that no longer exists.
Posted by martine at 16:02