the end of the world as we know it 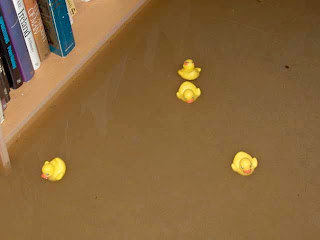 I came home from work on Thursday determined to moan about the rain, it having been another 'bath wrinkle day', then thought how well it all linked in to writing about my most recent read. The weather was so bad it reminded me of our year of the flood in 2007 when Moreton was engulfed in a tidal wave of rain that saw our house under several inches of water (a lot less than some people, but the houses on the other side of the road were spared completely). Dunk trawled through his vast archive of stuff and came up with the photos that we took that afternoon as the waters rose. It was all rather fun to begin with, Tish put on her bikini and sat in the hammock in the rain, and even as the water began to invade the house we floated rubber ducks and carried precious things up the stairs. It ended on Saturday morning when we stripped out the carpets and lino and then lived with concrete floors of six months until the builders moved in. 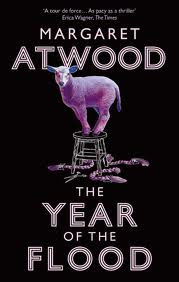 The Year of the Flood by Margaret Attwood
I knew this book had something to do with Oryx and Crake, it is kind of a sequel, so I kept thinking I had read it before as the names of the characters were so familiar, or maybe I had picked it up at mum's before and read a chapter or two. It is always a mistake to browse my mum's bookshelves as I always add at least half a dozen to the pile. She did have a little book in which you were supposed to write down what you borrowed so she could keep track of her books, but she said not to bother, I think maybe it's part of a futile attempt to downsize.
I really like dystopian fiction, though I always wonder why the future is never imagined as a nice place, with the human race learning from their mistakes and making a better world, rather than one where it has all come crashing down around us. What I think is interesting about a book like Year of the Flood is how it parodies the direction that the world is already moving in, the obsession with science and technology, the corporate takeover of society and the increasing divide between the rich and the poor. Our two heroines Ren and Toby are part of a group called The Gardeners, a religious cult that rejects modern culture and lives in a rooftop garden where they grow real food and await the coming of the 'waterless' flood that Adam 1 has predicted. You get to thinking that he has some kind of insider knowledge, that the Gardeners seem to have contacts in all sorts of high places and I wouldn't put it past them to have been involved in whatever nasty germ infects and destroys the human population. It's just too much of a coincidence that most of the people who survive seem to be members of their cult. What is most enjoyable however is how such a scenario lets the imagination run wild, and Atwood fills the book with outlandish creations, outrageous ideas and wonderfully horrid baddies, animal hybrids, weirdly coloured sheep who's wool is used for hair transplants, 'Secretburgers' (who knows what they contain), Happicuppa (aka Starbucks:-) and Painball, televisual punishment rather like Big Brother only with weapons.
The book really is about asking questions. Look where we might be headed, what sort of a society are we creating, what are the consequences of progress ... and most of all, will we get our comeuppance? It is not a plea to return to some kind of idyllic preindustrial 'naked in the woods' society. In the same way that the floods of 2007 came as a nasty shock to some small affluent enclaves of southern Britain, how easily mere stuff can be swept away, it is just meant to bring a pause for thought.
(If you are a fan of Margaret Atwood you can pop over and read about her poetry here, it is my second most visited post after the lizard cake and maybe we can buck the statistics and get it into first place.)
(p.s. there is no river in Moreton, this is pure unadulterated rainwater!)
Posted by martine at 11:38