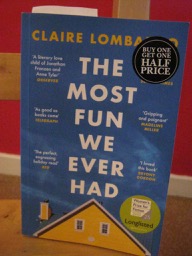 'The Most Fun We Ever Had' by Claire Lombardo was picked up at random in the Waterstones BOGOHP thing (I've been working hard, I deserved to buy some books). It is one of those family saga stories, just people and their tangled lives and relationships, marked by somewhat excessive tragedy and drama, as if it would have been dull without sudden death and secret babies. I found the jumping back and forth in time a bit annoying and an unnecessary device. And then she annoyed me more by biological inaccuracy; nice little scene: "There -he exhaled- was Marilyn, in their bed with a daughter on either side. The Tiny Seed was open facedown in her thighs. They were all sleeping soundly. Violet's head resting on Marilyn's ribcage, Marilyn's hand frozen in midworrying of Wendy's hair. His breath caught at the quiet perfection of his family, honey-blond Wendy and dark, serious Violet, tiny bodies in tiny pyjamas, their thumbs in their mouths, their legs - little frog legs- twined together. And Marilyn: the girlish smattering of freckles across her nose, the slight leftward tilt of her head. He noticed, suddenly -a sharpening of vision like Waldo materialising from a sea of striped Vikings- the curve of his wife's belly. He stiffened. It strained against the pale blue knit of her sweater, a swell of maybe eight weeks or ten." (p.141) This is the imagining of a woman who does not have children. You get a 'swell' at eight weeks pregnant, it's the size of a kidney bean! But an enjoyable read leaving you warm and fuzzy. 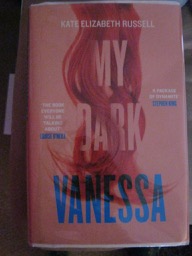 'My Dark Vanessa' by Kate Elizabeth Russell was the opposite of warm and fuzzy. It recounts a Lolita-ish tale of a relationship between a teacher and a teenage pupil, from the point of view of Vanessa. It shows you quite subtly how grooming operates, how she is made to feel special and important and is convinced that he loves her. The jumping back and forth in time was, in this book, an important device as you see Vanessa looking back on events and can observe the ongoing impact of the relationship on her. He persuades her to takes the blame for the rumours about their relationship and is removed from school. It is unpleasant and insidious, you can see her being manipulated but she does not. As new accusation emerge from the school after she has left she is forced to confront the uncomfortable truth about her abuse. I am not sure that even then she wanted to let go of the idea that he loved her. I did feel that it had some of the qualities of Lolita, the unreliability of the story as if she is more believing of the story she is telling herself than the reality of what is happening; the scene where he rapes her preoccupied me because it was so awful and her experience of it was traumatic, but afterwards she convinced herself it was what she wanted. A very thought provoking book.

In this scene, he is persuading her to come to his house for the first time, you can see the manipulation, that she kind of recognises but refuses to acknowledge: "He stares at me, the shine of his eyes moving back and forth. I gnaw harder at me cheek, thinking maybe he won't be mad at me if I hurt myself enough to ignite a fresh round of tears. 'Listen,' he says, 'I have no expectations. I'd be happy to sit on the couch with you and watch a movie. We don't even have to hold hands if you don't want to, ok? It's important that you never feel coerced. That's the only way I'll be able to live with myself.' 'I don't feel coerced.' 'You don't? Truly?' I shake my head. 'Good, That's good.' He reaches for my hands. 'You're in charge here, Vanessa. You decide what we do.' I wonder if he really believes that. He touched me first, and said he wanted to kiss me, told me he loved me. Every first step was taken by him. I don't feel forced, and I know I have the power to say no, but that isn't the same as being in charge. But maybe he has to believe that. Maybe there's a whole list of things he has to believe." (p.90-91) 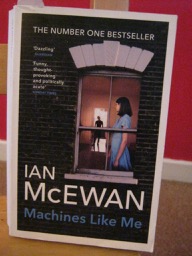 Mum sent me Ian McEwan's 'Machines Like Me' and I thoroughly enjoyed it, though did not find it funny which was how she described it. In it Charlie invests his inheritance on a 'synthetic human', and thus a relationship develops between him, Adam (the synth) and Miranda, his upstairs neighbour. McEwan has created an alternative 1980s, with Thatcher and Tony Benn, but with weird advances in technology out of sync with  other aspect of life. Artificial intelligence, and the idea of a computer thinking and learning like a human is separate from the technology that might create a robot that looks like and can pass as a person. Adam is more the latter than the former. He has all sorts of abilities and works hard to learn how to be a person, but others synthetics find human life unbearable and deliberately destroy themselves. In some ways the book is more about the relationship between Charlie and Miranda, and Adam is observing it from the sidelines, writing lovelorn Haiku to Miranda. Adam does not really have much 'personality' and you don't get attached to him as a character. I think this affected how much I thought of him as a person. Charlie and Miranda don't seem to think of him as a person and often treat him as a thing. Miranda has a hidden secret and as the events unfold Adam is forced to make a moral choice that will affect them all. There are a lot of interesting ideas in the story but I think all the historical stuff was not relevant, it felt just a bit of a gimmick. I really enjoyed 'Black Dogs' in 2017, 'Nutshell' in 2018 and 'Cockroach' last December. 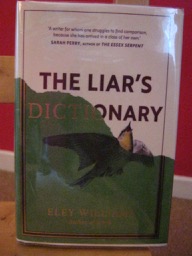 I found a review in the Guardian and 'The Liar's Dictionary' by Eley Williams was a delight. Peter Winceworth in victorian times, and Mallory in 2020, are both working on Swansby's New Encyclopaedic Dictionary. Winceworth is putting the mountweazels in and Mallory is working to take them out again. It is just a story about words and people who delight in them. The chapters are titled with words for each letter of the alphabet, from 'artful' to 'zugzwang'. I immediately warmed to Winceworth who is bullied by his colleagues and in a surreal scene he finds himself fighting with a pelican in a park. Mallory has to contend with mysterious threatening phone calls and the moral sapping ancient computer she is forced to work with. Here she muses on the hourglass busy icon: "The iconography of the hourglass hinted at a particular progression: that all natural things tend towards death. This was not good for office morale. Waiting for the computer-screen hourglass to empty and refill and empty again generated a feeling not just of futility but also of mortality. I understood why it was the favoured prop whenever 'Father Time' or 'Death' are figured as personae in Western culture, and if Disney's Alice in Wonderland's White Rabbit had been described as crying, 'I'm late, I'm late, I'm late!' while clutching an hourglass rather than a pocket watch, he would have been a far more morbid (iGoogled this on my phone) leporine sigil. Shouldering for room with skulls, burned-down candles and rotten fruit, hourglasses are also one of the recurring tropes of vanitas pieces, those works of art that illustrate the world's physical transience. Crumpled tulips, dry parchment. Trading upon this saturnine thrill of memento mori set-pieces, pirate ships of the seventeenth and eighteenth century bore hourglasses upon their flags alongside the more famous skull insignias. Hourglass iconography is also prevalent on a number of gravestones, often supplemented with mottoes such as Tempus fugit ('Time flies') and Ruit hora ('The hour is flying away')." (p.44-45) Sometimes you just find a book that speaks to you and this one did. It is clever and unusual, quirky with flawed and sympathetic characters, and a cat called Tits, what's not to love.