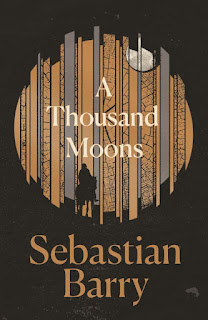 'A Thousand Moons' by Sebastian Barry is a continuation of the story in 'Days Without End' that I read two years ago. A Thousand Moons follows the story of Thomas McNulty and John Cole's adopted daughter Winona. The post Civil War world of Tennessee is a tumultuous place and their unusual mixed household gets some unwanted attention. Winona develops a relationship with a local man Jas, but given the opportunity he rapes her and she is left traumatised and confused. The Southerners are unhappy about the outcome of the war and the wider unsettled social and political situation rumbles in the background of their family's personal drama. Barry captures the atmosphere of the period beautifully; Winona recounts their life, interspersed with incidents and stories from her childhood. As a Lakota woman she has her own perspective on the situation and has worked hard to prove herself within a society that does not respect her. While she has the love and care of her extended household she tries to protect them from the problems she feels she has bought on them. She is intelligent and resourceful and tries to sort things out herself. In this scene she is trailing Colonel Purton's men as they go to confront some rebels, and she first meets the young woman who becomes an important presence in her life:

"The smoke of gunpowder rose from the melee. It might have been a clement morning mist along the peaceful river only for the great caterwauling of voices and the horrible screeching of wounded horses. I had seen just this before, but from inside a Sioux village. Inside the terror, at the heart of it. And everything I loved up to that moment about to be cancelled off the earth. As if bogus lives. Kill them all! And I sat there astride the mule like someone not there at all, but somewhere else, somewhere far away on the plains of Wyoming, but also, someone exactly there, living, gasping for breath, terrified. Then this strange girl comes blazing from the undergrowth, dressed vividly in a bright yellow dress that even in my great fright I noted it, bringing up her musket as if it was part of her own body, as if it had her own blood running through it in veritable veins, and fired it as my body. I felt the bullet tear into my right arm, I was only half leaning down to the Spencer rifle, I was just on the point of grasping it, when the bullet battered into my arm, battered into it, and I hauled up the Spencer, I knew the bullet was sitting in its little grave, and I fired blindly, something rose through me like a fire, my own blood was burning, it was the fiery pain of battle, and the pain pitched me down into blackness. No, no, now I was awake again, wide-eyed. That was a strange quick blackness. Did a minute pass? A moment? My enemy was now lying out across a riverside bush, also very strangely. I didn't know if I had killed her. Or even shot her. I couldn't see blood. She was a black-haired dark-skinned girl so beautiful the creek below wanted her. Her two legs remained on the bank, but the whole rest of her was depending on the kindness of that bush not to drop her down. Her head was furthest away, only four feet from the surging creek, which was full of spring rains. She was trying to bend back to safety with her two arms outstretched." (p.98-100)

Winona saves the girl and thus changes her life, in unexpected ways. The denouement was a little too neat but it only detracted in a superficial way from the strength of the story. Sebastian Barry creates such wonderful characters who you really bond with and allows you to feel that human beings are capable of such love and goodness in the face of the crap that life throws at them; I also loved 'A Long Long Way' that I read in 2012 (and wrote a much better review of).

Its late now and I have to sleep, and the piles of parcels are still mounting up at work; Huffington Post ran a story that confirms the chaos is widespread. I am going to risk posting a pressie to my sister, but christmas cards that I ordered three weeks ago have not arrived so those will probably be late, or non-existent this year. We have panic-bought a stock of sweeties and some advocaat so we are going to hunker down over the holiday weekend and eat ourselves silly.