a pile of books 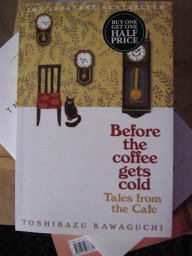 We have been buying quite a lot of books by Japanese authors, partly for Monkey, but partly because I want to become accustomed to cultural differences; formality in speaking and behaviour are utterly different from here. 'Before the coffee gets cold' by Toshikazu Kawaguchi (who does not have a website or a wiki page) is a curious little book about sad people. The 'family tree' in the front lists the main participants in the story; many of them are dead. Why else would you want to travel in time, other than to see someone who you could no longer see? You cannot move from your spot at the cafe table, nor alter anything about the course of history, all that is on offer is small comfort. And yet comfort is always welcome. The door goes 'clang-dong' as people come and go, the light and the decor remains unchanged over the decades, a pregnancy bump becomes Kazu, a young woman who hides her sadness behind the coffee pouring ritual, but you feel as if the chirpy Miki, keen to learn the secrets of the cafe, will bring a whole different atmosphere to the place.
"The woman in the dress was not a particularly fast reader. Despite it being the only thing she did, she would finish a book about once every two days. Kazu would go to the library once a week and borrow a selection of novels. These books weren't presents, exactly, but for Kazu, supplying them was more than just a 'task'.
Until a couple of years ago, the woman in the dress read a novel entitled Lovers, over and over again. One day, Miki remarked, 'doesn't she get bored reading the same novel?' and presented her own picture book to the woman in the dress. Kazu thought, What if I could please her with a novel I chose? ... and that's what led her to start providing novels in this way.
As always, however, without a care for Kazu's thoughtfulness, the woman in the dress simply reached out, took the book silently and dropped her eyes to the first page. The expectation disappeared from Kazu's expression like sand falling in an hourglass." (p.76) 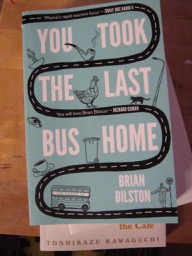 I very much enjoyed 'You took the last bus home' by Brian Bilston, and have meandered back through it several times over the last few weeks. What's not to like about a poet who think's Jeremy Clarkson is a twat. I sometimes love pretentious poetry, I sometimes love old serious poetry, sad poetry, very sad poetry, beat poetry, wry poetry, in fact there are 113 poetry posts on this blog, and here's another one. He covers a wide variety of topics, from mobile phone chargers, to the Bee Gees, to Crocs, to the Chelsea Flower show. Many made me laugh out loud. He has a particular thing about punctuation. But I found myself drawn to the times when he was subtle and clever, here, one of quite a few haiku that I loved:
Haiku #478629
as he left the train,
he remembered to take all
his longing with him
and also:
you stitched together
the pauses
from old, discarded
Harold Pinter
plays
until you had made yourself
a
blanket
of
silence 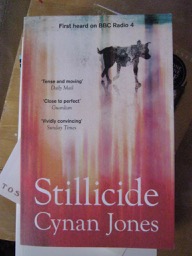 'Stillicide' by Cynan Jones was as close to poetry as a novel can get, so much of it takes place inside people's heads. In a slightly dystopic setting, not so distant as to be unimaginable, the people in the story are linked in distant ways, and their minds are preoccupied with worries and memories, that distract them from the world in front of them. Branner, a train guard, David and Helen who scavenge on the seashore, Nita and Hillie who make flowers from rubbish, Cora and Leo, Colin the journalist, Ruth the nurse, their lives are dominated by the issue of water, the lack of water, the control of water. It has a feeling of drabness. As if things don't get washed much. Just thinking about it made my mouth feel dry. He creates this very intense atmosphere, but then scatters in little moments of hope, connection and loveliness, as if to ward off despair.
"The day seemed indecisive. The breakers of the outgoing tide smushed and drew. Sand martins spun from their tunnels in the cliffs.
Every so often there was a ticking pitter-patter as the low breeze rattled the dry seaweed.
There had been another August storm.
It has washed the sand from the foundations and fallen rubble of two houses that had recently gone onto the beach, and from the skeletal groin that stretched into the sea.
Against the shifting contours of the shore, the pilings of the old sea defences looked ancient and immoveable. Pitted and barnacled and hung with algae.
David considered that the principles, of how to build a structure to hold back waves, were the same principles his team had used to build footings for the pipeline, all those years ago. Before they had a train to carry water to the city. That had been his life. The engineering of support. Holding things back. Or holding things up." (p.40-41) 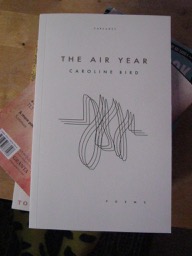 As I said earlier, I like all kind of poetry. 'The Air Year' by Caroline Bird is another bedside book that I have meandered back and forth through over the last weeks. I went back and read some of the longer prose poem pieces. I particularly liked one entitled Small Children, much to relate to there, all the bad stuff: "They sit in plastic umpire chairs at the dinner table/ shouting out unintelligible scores" and "They're hypocrites./ They spy on you in the toilet. Parents aren't permitted/ even the smallest private perversion yet a child/ can secretly urinate in a drawer for three weeks/ until the smell warrants investigation" and "Little children are like/ the tsarist autocracy of pre-revolutionary Russia" but it ends beautifully "We kneel to tie the laces of their unfeasible tiny shoes." The one called 'Nancy and the Torpedo' is particularly surreal, as is 'Surrealism for Beginners'. They are incidents and accidents. Not funny or political. Lets have this one:
Prepper
She has not converted a rusty bike into a device
for grinding wheat or sewn a family
of Hazmat suits or built a reinforced steel underground bunker
from the roofs of twenty double-decker buses or decorated her
decontamination room with laminated photos of bygone
natural beauty - sunsets over oceans, children laughing unafraid -
she does not skin roadkill raccoons with a Bantaga knife or clean
her guns over breakfast but my mum's preparing
for the end of the world. She had written her own book of revelations.
It begins 'Expect to outlive them'.
She scrawls my brother's name with a sparkler just to
rehearse his evaporation, stands in the cemetery
of her mind, pre-grieves, seasons plots with tears, graves
so fresh they're still flowerbeds.
As I typed it out it reminded me of this last one in Brian's book, entitled 'Ceci N'est Pas un Poème':
I wrote
some words
and made them look
like a poem
put line breaks
in
thought-provoking
places
but it was still
just some words
and not
a poem
Stay safe. Be kind. Stay human. Read some poetry.
Posted by martine at 16:11