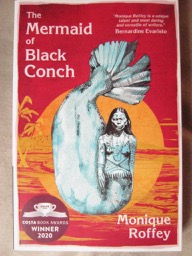 Julie lent me 'The Mermaid of Black Conch' by Monique Roffey and I wolfed it down. It is the story of David Baptiste, and of Aycayia, and of the island of Black Conch and its checkered history. It is told from a variety of perspectives, in different voices, then also third person, observing, more dispassionate. Some American tourists arrive on the island and hire a boat to take them fishing. After a struggle that lasts the day they land their catch, and it is a mermaid. Leaving her strung up they go off and get drunk, and David takes her home, intending to put her back in the sea. Almost immediately she begins a slow transformation back into a woman. He tries to hide her from the curious neighbours, and finds himself helped by Miss Rain and her deaf son Reggie, who befriend Aycayia and teach her to talk.

"Every morning, the mermaid, Aycayia, half-slept and listened to the rain, and remembered more and more of what it was to be a woman. She enjoyed the sound of the rain's soft heaviness. it reminded her of her old self, of long ago, when she had lived in a village on the island shaped like a lizard, when she was the daughter of one of the wives of a brave casike, when she has six sisters. She tried to remember the name and then the face of every man who who'd visited her, and watched her dance; then she tried to forget them all. Her loneliness echoed in her bones, the centuries of swimming in the sea, half-fish. She wondered what had happened to the old crone she'd arrived with - Guanoyoa. After the huracan, Guanoyoa, a wise old woman who told uncomfortable truths, had been cursed too, changed into a leatherback turtle, and that was how she'd ended up so far away from the coastline she knew. She had followed Guanoyoa's instincts of migration. As she lay under the thin sheets of David's bed she wondered how and why she'd transformed back into a woman. She wriggled her old toes, which were now her new toes. She curled herself into a C and listened to the musical sound of rain on galvanised and felt comforted because she knew that parts of the world hadn't changed. There was still rain. This meant there were still clouds, sky, birds - a world she could read." (p.59)

Early, early, before dawn, I took my pirogue out to sea, to the same rocks off Murder Bay. The water quiet, and a small bit of rain coming down. Is like my place to go and pray. I drop anchor and sit for a while. I ent really go out to fish. The sea dark and the sky still dark too. There ent no feeling quite like being alone in a boat in the night. Land in sight, oui. Out there ghosts visit on the breeze, they visit from centuries past, from a time before all of we get mix up and lost. Though I always know who I was in Black Conch, family history don't go back far. That memory was rubbed out because of the badness of slavery. Baptiste is plantation owner name, French man name from way back. Yuh think I happy with that? I figure my real name would never be known to me, a mystery. I felt myself fill up with pain, with ol'time loss from those days. It does come from nowhere now and then. the feeling come like a message on the wind, or that is how it ketch me. Now and then. Mostly, when I was out alone in my boat. That is where I met my soul friend, the mermaid woman from so long ago she cyan remember sheself either. We were both lost people. I felt all twist-up in my chest, sitting there in my boat. Was that feeling for she or for us both?" (p.94)

But the rumours about her begin to circulate. The nosy neighbour Priscilla concocts a plan with a local policeman to capture her and the American men are lured back. Miss Rain's quiet existence is disrupted by the return of Life, Reggie's father. The deeper David and Aycayia fall together the more fate seems to conspire to tear them apart. Add in a huge storm threatening and a dramatic climax is in the offing for everyone.

This was a wonderful book, intense and atmospheric; you feel the ongoing impact of the history of the Caribbean, how people's lives continue to be shaped by it. But it is mostly about a mermaid, learning to be a woman again, about trust, about love and loss, and eating mangoes in the bath.