I bought myself a 5 metre length of muslin from ebay, it seemed a cheaper way to experiment than with silk, though I am guessing that the overall effect is not so good, but then I can also have a go at dyeing some lengths. This piece started out about 150cm by 30cm (approximately). I was going to take a photo of it all laid out but forgot, then when I tried to unroll the damp package it threatened to fall apart so I didn't risk it. So I laid an outline in undyed roving, mainly to give it some shape and then added a stripe down the centre with shades of blue and green. I am thinking I put too much on, as the tutorial on Working with felt said to scatter a very fine layer (sorry, you can only access the instructions if you are a member I think). So, basically the instructions are: 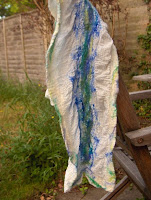 Now I really like the 'top' side with the coloured design on it but i think that the idea is to show off the other side that gets this interesting puckered effect, caused by the wool fibres migrating through the fabric and shrinking around it. I certainly can see what the interest is because there is an endless variety of effects you could achieve depending on what fabric you used and how you arrange the roving. 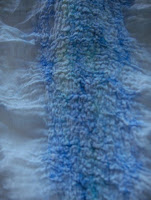 Also made a small felt cover for the camera. It was supposed to be for Dunk's new camera but came out a bit too wide so will use it for the old one which is slightly more chunky. (I really like the colours on this but fear it may be a little too psychedelic for him:-) 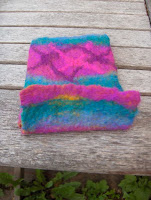