I am just on a bit of a roll here so, having made the porridge quite early and done a bit of blog browsing first thing I got up with the intention of making good use of the day. I did have to do last night's washing up before I could make any more mess, and contend with intermittent texts from M throughout the day (still feeling bored but less ill).
Last thing yesterday I risked another experiment and did layers of pink and yellow around a tennis ball (Dunk did venture into the nettles to retrieve the basket ball but I decided it was a bit large for a first try.) So this morning I cut it open with a craft knife. The inner layer had not felted very well (I had been worried about working it too hard as it might not bond to the next layer if it was too well felted ... but then this is experimentation) so I just played around with the shape as I tried to get it to felt together a bit more. Basically I just flattened the bottoms of each half to make them into little bowls. I trimmed the top edges so that the coloured layers shows up a bit more, and strung the little beads on a bit of silk thread. 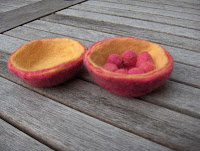 Next I did another pouch, this time it is a little larger and I remembered to round the bottom of the pattern piece. I used a variety of green shades, layered and criss-crossed with each other and it has come out with a slightly 'marbled' kind of effect. It is lined in yellow (though you can't see that of course) and I am thinking of doing a long strap to match and probably a fastening with a felt bead again. 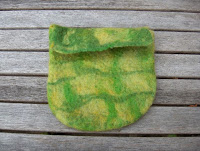 Then Dunk and I went to the shop, during which outing I noticed how worn my purse was getting (it is a really lovely tye-dyed velvet thing that I have had for ages), so I thought maybe a little wallet to hold my cards would be the thing to do. Now I have to admit it is a bit of a fluke that it came out exactly the right size, though I did just make it a bit smaller than the one I did yesterday. It has stripes on one side and spots on the other in matching colours. I am going to probably put a little button and loop at the top just to stop them falling out. And I was smart-arsed and created a little divider inside so it has two compartments, you can see it in the photo, it is yellow one side and orange the other, and the whole thing has pink lining the inside. The top edge is a little uneven but then I am still struggling with making things come out the right size. 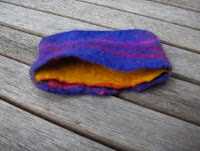 Then these dreds are Tish's. I made a thin cord out of the very last bit of my home-dyed and wrapped it with some silk waste, then I was messing around making tiny felted rings (which shrank too much to get on my finger) and Tish came in and liked the idea of making dreds (she has some shop bought that she used to tie in her hair) and proceeded to punctuate her college work with coming down to raid my stash. 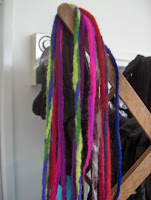