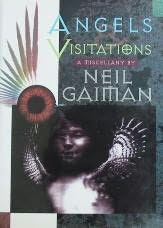 Am posting today from Manchester staying with Julie and Al. Last night Al lent me this Neil Gaiman book, 'Angels Visitations' which is a collection of what he refers to an 'miscellany', some stories, some poems etc. Just like Fragile Things that I read back in December last year it is very surreal and thought provoking. Very hard to describe so this is not really a review as such but I wanted to post this quotation from the book, which is actually an entire story, very short, which left me very sad. It wasn't until the very end that I realised it was about Santa Claus, I had never thought before that his role might in some way be a punishment.

"Nicholas was ...
older than sin, and his beard could grow no whiter. He wanted to die.

The dwarfish natives of the Arctic caverns did not speak his language, but conversed in their own, twittering tongue, conducted incomprehensible rituals, when they were not actually working in the factories.

Once every year they forced him, sobbing and protesting, into Endless Night. During the journey he would stand near every child in the world, leave one of the dwarves' invisible gifts by its bedside. The children slept, frozen in time.

He envied Prometheus and Loki, Sisyphus and Judas. His punishment was harsher.