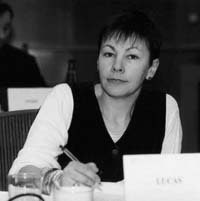 While all the pundits and politicians are bemoaning the hung parliament I am celebrating, it is what I have been rooting for since Mrs T arrived in 1989. As far as I am concerned I hate the whole 'strong decisive' government thing, I want politicians to have to work together, to not be able to ride roughshod over opinions that differ, claiming a 'mandate' to act exactly as they see fit without considering other options. The big majorities that governments in the last couple of decades have operated with have given them an inflated view of their own power. I have consistently spoilt my ballot with a protest about proportional representation when I have not had a candidate I wanted to vote for.
Though I was thoroughly depressed to find that the BNP got nearly twice as many votes as the Greens I hope the election of the first Green Party MP Caroline Lucas marks a positive moment for British politics, and that wherever Nick Clegg decides to offer the Lib Dem support we get the reform of our election system that this country so badly needs (but don't trust that bloody Cameron bloke). 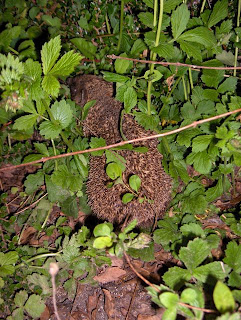 And last night we had a couple of hedgehogs snuffling around just outside the back door, so here is a cute photo to lighten the atmosphere. Tish says that apparently they have their own little eco-system of specialist bugs that keep their prickles clean (though if you have ever been up close to one they stink *really* bad.)
Posted by martine at 16:35