Twenty one years ago tonight I went off to Guides as usual after a busy day shopping in town, pretty much despairing that the huge lump I was carrying around with me was ever going to make their appearance, I was 38-and-a-bit weeks pregnant. Then at 8.45pm I felt this little pop and my waters broke (fortunately not in a gush or anything). Mary (ex-mother-in-law) took me home and we called the ambulance. By the time it arrived I was well in labour and a bit iffy about going anywhere. The ambulance man said he had delivered a baby but never twins. So we went and I swear that the driver hit every pothole down Carrville high street, while I swore at him the entire way.
Tish (Thymian Maria) arrived at 10.40pm and Jacob followed shortly afterwards at 10.55pm, no doctors, no messing around, it was quite a relief after Lewis. The first year went past in a bit of a blur but since then I have always considered it a blessing to have two together as they always had someone to play with, and mostly they played quite nicely:-) Happy Birthday 21 today. 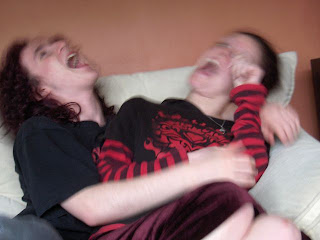 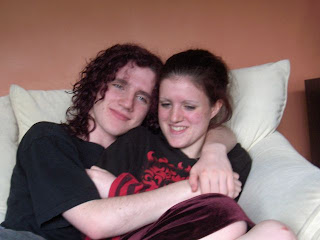