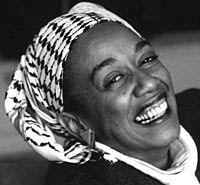 Last night I went to another poetry reading, this time at The Contact, an event bringing together a writers collective called Speakeasy People, a group of young poets from Manchester called Young Identity and Jean 'Binta' Breeze. Although Jean was the main event (and she had held a writers workshop in the afternoon) the whole evening was just excellent, almost an overdose of ideas and images coming at you in quick succession, and it was nice to get to some real forthright political commentary. The theme, unintentional I imagine, of the first half was a rejection of conformist/consumerist society. It was interesting because it was not loud and angry but quiet and thoughtful, and thought provoking, and all the participants had quite distinct voices and styles.

Jean was obviously a practiced performer and it was completely spellbinding. She started off telling us things about her life, when suddenly you would realise that it was a poem. She moved between stories and poems and songs seamlessly, creating a very intimate atmosphere, like you were chatting round her kitchen table. She was equally convincing in the voice of a young Jamaican child as being a world-weary mother, and she gave such a vivid portrayal of her cultural heritage and history. I was left with the feeling that some poetry needs to be spoken aloud and some works well on the page of a book, and this poetry needed to be performed. Her work seemed so integral to her personality I imagined it feeling a little flat as mere written words, so here she is performing one she did for us:

And just for the fun of it here is Bob Marley, singing the song that she ended with, all the audience joining in:


Her books are available here from Bloodaxe Books.
Posted by martine at 23:10