Eating at the Edinburgh Fringe

Though we did take some porridge with us to make breakfast we found ourselves awake well before the campsite shop opened for milk at 8 o'clock, so mostly we caught the number 11 bus to town and browsed the streets for somewhere to eat. I was determined to use small local businesses, which was very successful I thought as we found plenty of lovely places to eat. Top of the list is Café Turquaz on Nicholson Street, where we had breakfast, lunch, afternoon tea and dinner, on different days. It is very reasonable and the staff were lovely and friendly. Their tea came in a proper pot, the chocolate cake was great and the felafel/hummus salad was just perfect. 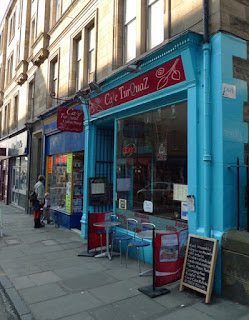 One morning we took a slight diversion and, attracted by the baking smell, were drawn to an unassuming little bakery called 'Preacher's Patisserie' on Lady Lawson Street (just off West Port at the end of the Grassmarket). I had tea and freshly baked scones that were still warm from the oven. Breakfast for both of us was less than a fiver. 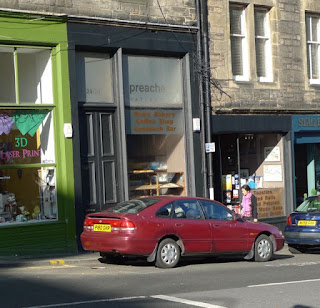 The Grassmarket has a slightly continental feel to it, with lots of cafés, pubs and restaurants, many with seating on the pavement, definitely something for every taste and budget. There is a selection of pizzerias and to be honest we just went into the first one with empty tables. We ate at Ristorante Gennaro before going to see 'Love Sick', and Monkey was very anxious not to be at the back of the queue, so we did not linger over dinner, but I had the seafood spaghetti and it was lovely. 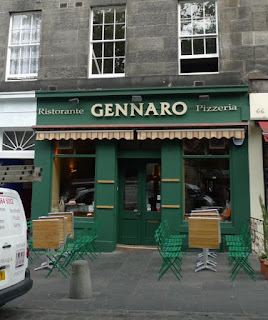 Dunk and I spent quite a bit of time loitering in cafés between shows. This is the Cow Café in the Underbelly on Cowgate, where we were tempted in by the offer of a comfy sofa. We also went to the one in the Storytelling Centre and the library, and mum highly recommended the one on the roof of the museum. All the eateries on the Mile seemed perpetually crowded but we found if you went off the main path a bit there was always somewhere nice to stop off, and often much more reasonably priced. 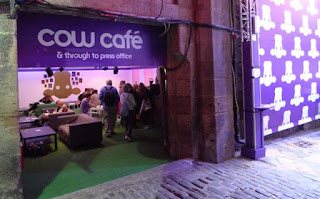 Over Langshaw Ice Cream sells out of a former police box at the near end of the Grassmarket, and for £2.50 you can have a scoop of pink peppercorn and heather honey ice cream. They did have other much more sensible flavours but why would you want them? 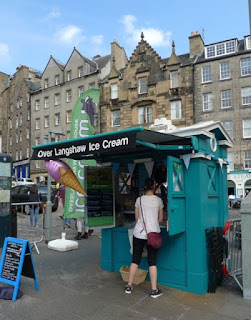 Pies are definitely the perfect food when you are on the go, warm and filling, and, more importantly, portable. You can sit down in Auld Jock's Pie Shoppe (also on Grassmarket, just behind the ice cream stand) and have yours with mash and gravy but the place is tiny so we took out and ate them sitting on a bench under the trees. 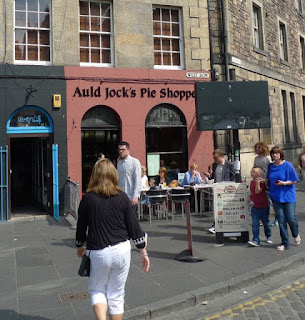 Monkey had already made her way to Piemaker on South Bridge, where she discovered they serve the perfect food: macaroni cheese pie! I had a haggis roll (distant cousin of the sausage roll) which was excellent, though they do also do a haggis, turnip and mash pie. Highly recommended by all and sundry (no eating in here, it is takeaway only). 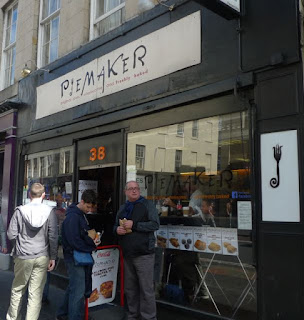 We also passed time randomly at Saint Giles Café on, unsurprisingly, St Giles Street opposite the cathedral, and another little place on the Grassmarket, neither of which seemed to know how to make a decent cup of tea, giving me hot water with a teabag on the side. 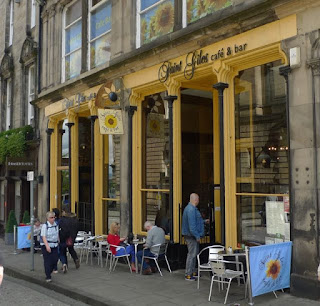 In spite of how much coffee he gets through at home Dunk would frequently turn down my suggestion of a cuppa, so I did not eat nearly as much cake as I had intended. I will be making up for that next year.
Posted by martine at 20:39