Poetry at the Edinburgh Fringe 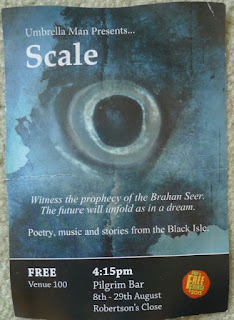 Sadly we did not go to anything like as much poetry as I intended. 'Scale' was one of the first flyers I was handed and is a mixture of poetry and music presented by Colin Bramwell. I enjoyed it very much but I found myself caught up in the images and the atmosphere he created more than being able to follow the story that he was telling. It was slightly spoiled by having merely a curtain dividing us from the bar and the noise from the adjacent space was a little disruptive.

'Building God' on the other hand was in a wonderfully atmospheric space in the depths of the Banshee Labyrinth (the most haunted pub in Scotland) on Niddry Street. David Lee Morgan gave a very powerful and passionately political performance, a challenge to the next generation to not give up on the idea of revolution. His idealism was a real inspiration to me because I so often find myself feeling disillusioned with what is possible in a world where capitalist ideology has come to dominate so completely. 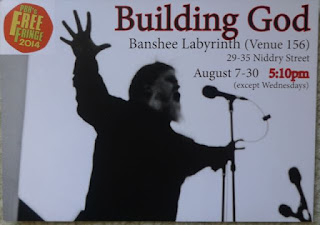 On our last night we stopped out a bit later than usual and went to see the wonderful 'Loud Poets'. They are appearing nightly till the 31st with a selection of different guest appearances at the Scottish Storytelling Centre, we were graced with the wonderful Hollie Mcnish.

Here is a taste of what was going down:


(Tickets for all events can be booked through the Edfringe Website.)
Posted by martine at 20:00