The Fourth Monkey Theatre Company are presenting four productions this year; Year of the Monkey participants are putting on three Grimm's Tales: Rapunzel, Little Red Cap and Hansel and Gretel, while the two year course are doing 'The Bloody Countess' (which we did not see), based on the true story of mass murderer Elizabeth Bathory. 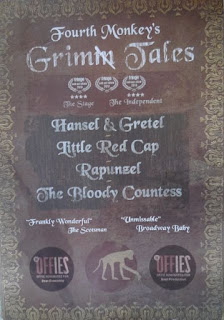 While they have all been directed by different people the three productions have all used a dual narrative, with the original tale running parallel to an alternate more modern story. Their interpretations have more in common with the disturbing original tales than any sanitised version that you might be familiar with, and are not suitable for families. In fact Steve had to insist that one parent who came in with a young child was asked to leave by the box office staff. Rapunzel gives us three witches who jealously guard the innocence of their 'adoptive' daughter, with the parallel story being about a modern day mother suffering from post-natal depression. Little Red Cap follows the naive young girl sent into the woods to face a fantastic wolf. The second story mirrors it more directly with a tale of a young girl coming to work in a care home, and finding that there are unpleasant goings on beneath the benign surface. Hansel and Gretel gets to grips with the big issues of child abuse, neglect and incest, in a dark and disturbing story told without words. Their second story tells the life of Antonin Artaud whose theories about the Theatre of Cruelty have influenced 20th century theatre, and this production. They have had one 'bad' review (all publicity is good publicity so they say) and one good one, and they have enjoyed counting how many people walk out each evening (only three on Friday), but the flyering has obviously been going well as they have been consistently packed and even sold out several nights.


They are preforming in Space 9 on Niddry Street every day until the 29th, at 4.30pm, then 6.00pm and 7.30pm. I left Monkey my camera so hope she will get some other photos of them in costume/on stage, but Dunk caught some of the cast doing an impromptu rehearsal outside just before their performance earlier this week: 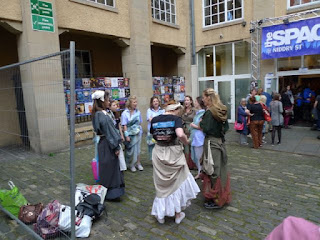 (Edited 15th September) The cast of Hansel and Gretel looking awesome after their last performance. 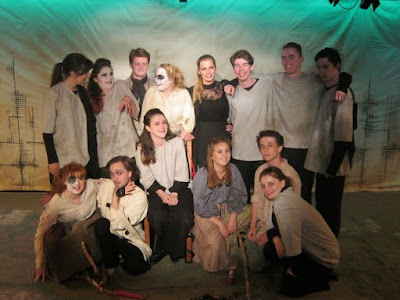 Email ThisBlogThis!Share to TwitterShare to FacebookShare to Pinterest
Labels: Edinburgh Fringe, theatre, year of the monkey