I think the skin on my hands has shrunk nearly as much as the roving this morning. I dyed the last of my undyed roving last week, in the same peachy pinks and oranges that I used on a recent batch of home-spun yarn. It did spread quite a bit while it sat overnight so the patches of yellow were mainly turned to orange but on the whole it came out lovely. So it was sat there just begging to be used for something nice (and I have some shop bought purple blend on the spindle at the moment that has been neglected for the last fortnight) so more felting was definitely in order today. 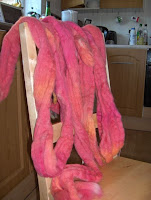 First attempt was a small pouch done around a piece of bubble-wrap that I cut out of a padded envelope. Just playing around really, having watched a video on Youtube of someone doing this project. I embellished it with bits of dyed silk waste. I forgot to round off the corners of the pattern piece so the corners had come out a bit 'pointy' so I had to work them quite hard to shrink down and look a bit more curved. Am not sure how to fasten it shut as I think the flap is a little too small. 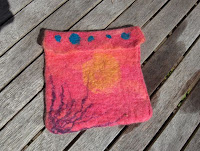 Second one started out as a bowl made on a semi-circular pattern, I rolled the edge down as it was rather taller than I had initially intended: 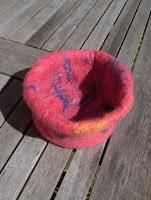 but when you turn it over it becomes the cutest baby hat ever:-) (again embellished inside and out with some lovely lilac silk waste.) 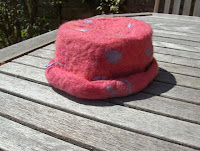 But then I got on to the thing I had really been thinking about. I got out the pattern piece I had made for the previous waistcoat and, taking a bit of the thick plastic I use to cover the kitchen table, I cut another one about 2/3 inches bigger all round. It took quite a long time, and a great deal of rolling and re-rolling as I was nervous about it being thick enough (I only had a small fistful of the dyed roving left in the end). There are a couple of patches where it is a bit thin as it was very hard to tell the thickness when you have two layers with plastic in between. I did not add any decoration as I just love the variation in the colours that run through the felt and did not want to detract from that. It is lovely to have the sunshine today so I can start taking my photos outside so you get a much better impression of the colours. Am going to learn how to make a slideshow so I can put up the 'process' pictures without taking up too many column inches of blog. 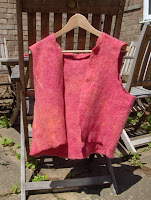