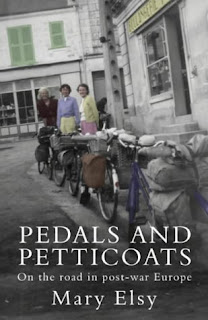 Pedals and Petticoats: on the road in post-war Europe by Mary Elsy

This is my first book in the Women Unbound reading challenge. I picked it out because I like books that are historical but with what you might call 'human interest'. It is also about the history of women's experience. You hear quite a lot about how the two world wars changed the lives of women, but how after their heroic contribution to the war effort they were expected to return to their former lives, though I am thinking this was less so after WW2. This group of young women however would have been teenagers during the war and it is 1951 when they decide to embark on an epic journey around Europe by bicycle. What they did was quite remarkable at the time, there was still very little tourism and for young women to travel like this was most unconventional. Their journey feels somewhat symbolic of the post-war optimism, that anything now was possible and there was a bright new future. It was interesting to read that in spite of the widespread poverty that they encountered there was real warmth in the welcome they received wherever they went, and although, through a kind of bizarre naivety, they were very trusting and got themselves into some potentially dangerous situations, there were never any real threats to their safety. I describe them as 'innocents' because it seems that they launched into the journey with a youthful enthusiasm, with very little idea of what they would encounter and how they would communicate with the locals. They are frequently rescued from difficulties by gallant english speaking gentlemen who sort out their problems with a flourish, find them places to stay and entertain them with amusing anecdotes.
The writing has a little of the 'Enid Blyton' about it, feeling quite dated, though the book was only published in 2005. It is merely a description of where they went, who they met, what they ate and places they stayed. I was hoping for a little more about the lives of the people they encountered, but really the focus of the story is their journey, with far too much about bike problems and how it was difficult to find somewhere to wash their clothes. It was interesting reading in terms of understanding their expectations and attitudes to their experiences. 'Stoic' would be an appropriate word. They put up with not inconsiderable discomfort and inconvenience at times without much complaint. On their own they were a pretty resourceful bunch, but the moment a helpful man appears on the scene they defer totally to his decisions and seem incapable of asserting themselves. I tried not to be irritated by this but it was a recurring pattern throughout the story.
Mary writes a brief epilogue describing what each of them did afterwards. I noticed straight away that only one of the four got married, and mused on whether it was some reflection of their adventurous spirit, that they were not the marrying kind, was this my 'feminist slant' that marked them out as career women ... and then I thought that this was the case for many women after the war, that there were fewer men around to marry.
Post Script 24th November: I realised that this is a slightly dismissive review and I didn't want people to think I did not admire the achievement of these women, it was quite an astounding journey. It was just the book I didn't like.
Posted by martine at 09:01