I am NEVER taking time off work again! Came home today and I could hardly stand up, and hardly sit down either, every bit of me ached. It goes to show how much this job really does keep me fit. I have done nothing ... and I mean nothing ... for nearly four weeks. I didn't even clean the house, which is saying something 'cos I hate to sit around if I think the place looks filthy. It's like my muscles have atrophied, they have completely forgotten how to work. So you could say it was a bit of a shock to the system.
On the up side I didn't waste my last day off yesterday. The lovely Sadie, eldest daughter of my dear friend Julie, went off to uni in September. I promised her a new duvet cover at the time and then totally failed to live up to the promise. The whole family are coming down to spend the weekend, partly to see us but also so they can go and spend the day with Sadie, so I thought I would make one for her now. It is done in mainly royal blue and bottle green satin with some bits of velvet thrown in for good measure. As an experiment I appliqued some of the leaf designs into the centre since I had only used a relatively small amount of the embroidered satin. It was nearly a big mistake as the machine decided to try and chew up the fabric, but I just managed to rescue it and fix what was going wrong. I am very pleased with the outcome, the overall effect is lovely, just don't look too close as the stitching on the applique. 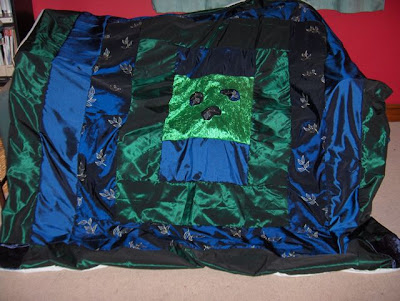 The original laptop is now sporting a nifty little antenna, as you can see in this photo of Tish. We were getting very annoying 'kernel panic' crashes (you really don't want to know, unless you are a computer geek, in which case you already know) which Dunk sorted by getting an external pickup for the wireless internet. I managed to take this photo and she didn't even notice, you can see her new hair cut, which is quite a transformation if you look back at the old one. She had worn her hair long her entire life ... kind of like me only I am too big a chicken to risk the change. 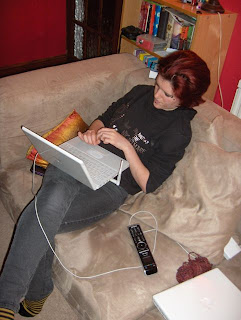