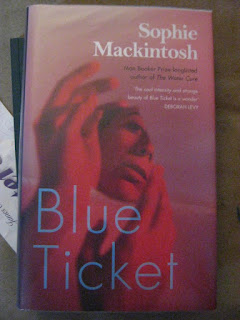 'Blue Ticket' by Sophie Mackintosh has something of 'Handmaid's Tale' about it, since it concerns women and their role as reproducers of the species. In the story young women are sent, on first menstruation, to be given a ticket, that decides for them if they will have children or not. Those not permitted at implanted with an IUD and sent off 'to the city' where they make a life for themselves. The whole scenario is not explained in any way; the lack of backstory is vaguely unsatisfying because it means the whole book takes place in something of a vacuum. Other aspects of life seem relatively normal, she has a job, friends, boyfriends; it's just this bit of metal that prevents her conceiving that is out of place. So the story, her removal of the device and subsequent pregnancy and 'escape' are all somewhat contrived as a means for characters to have a debate about what it means to be a mother, what significance motherhood might or might not have in the lives of the women she encounters along the way. Men seem to be removed from the discussion. It is unclear if or how their lives are impacted by the restrictions put on the women. Almost everyone in the book is anonymous,  people with initials not names, even characters with names tell you that they are made up, to protect themselves. Her life is tracked and surveilled in unclear ways and the whole things seems like it would be a whole lot of bother. That's the thing with authoritarian states, I always think it seems like so much effort to control people, when capitalism, mass consumerism and the internet seems to do it so much more efficiently.

It is as much an examination of privilege as it is of motherhood. Mothers and babies are treated as special, 'blue ticket' women are second class women. Do people just want what they can't have, the opposite of what they have? Is having a baby a choice anyway? Lots of choices are removed from you because of circumstances in your life beyond your control, why is the choice around motherhood so significant? It makes me think back to my own 'choice' to have children, and in what ways it was a conscious choice. In many ways having a baby is just the natural course of events and the choice to *not* have any children is the conscious choice. I listened to my friend this morning grieving the loss of the life she has not had because she has children; this is not because she did not want them, but because for every choice you make you fail to make an infinite number of other choices (don't you love the many worlds theory, where somewhere there is another you who can play the violin ...) So motherhood, either forced or denied, just becomes symbolic for patriarchal control; when do we ever hear so much as a whisper about controlling men's procreative rights or bodily autonomy. In the real world everything from China's one child policy to US anti-abortion legislation seeks to control the autonomy women have over their own bodies. I thought the book was interesting for taking the 'pregnancy denied' route, to think about the impact of being forced to have a life free from parental responsibility or unwanted pregnancy, but it is simply the other side of the same coin as Handmaid's tale, because while the urge to procreate may be the thing that makes us more like animals, the necessity of free will is what defines us as human.

"This was the kind of place where mother's lived, where white-ticket women lived. they were somewhere nearby. I saw pairs of them walking together with their arms linked, no bones, net shopping bags filled with fruit and vegetables. In a shop I picked up a black maternity dress with yellow spots and a white leotard for the baby. Here, perhaps I could be who I wanted to be. I didn't have to be a woman hounded off buses, a woman tricked into bathrooms, a drinker, a slut, a piece of shit. My hands skimmed over the shrunken vests, the socks like egg warmers or knitted thimbles, striped hats. I would not be sent away like I had been in the city, I would refuse it.

Don't you want to try it on? the woman at the counter asked. Her hair was done up in a complicated braid, her cheeks very pink. No, I said. She slipped them into a paper bag for me and I left at once, walking quickly as I could. I looked around for emissaries, stretching their legs on a lunchtime walk or reading the newspaper at a table outside.

In a cafe up a side street a safe distance away, I ordered a pot of tea and sat outside, sunglasses on, pretending to read the newspaper. The news was all bad. The ashtray was full. The kind waiters came to empty it and to bring me my tea. Are you on holiday? she asked. I nodded. Oh, you've come to the right place, there is no place more beautiful than here, she told me, she was glowing with certainty, she didn't even seem to notice my silence or the bad way I smelled or my jeans rolled up and wet from the lake. I was performing motherhood the way I had performed adulthood, all those years ago. I was acting like it was something I deserved and could do." (p.126-7)

Sorry, rambling and incoherent somewhat, though it raised a lot of thoughts as I read that I did not make note of, and the arrival of Adylaide since I read it reminds me of how intense the attachment is to your own genetic progeny. (No disrespect intended to adoptive, foster or step families, or whatever makeup your family group may be, all routes to loving family life are most welcome. All sympathy for people with conception issues for whom such stories would be no doubt hard reading.)

Stay safe. Be kind. Have a baby, don't have a baby, whichever, it's your choice.