This is another rather dog-eared looking book, and it was certainly very well read. 'There's a Hippopotamus on Our Roof Eating Cake' by Hazel Edwards, illustrated by Deborah Niland. We return here to children's imagination but with a whole new take on the 'imaginary friend'. The little girl in this story explains the presence of a leak in the roof with the idea that there is a hippo on the roof, and he then becomes the focus for her interests and wishes. 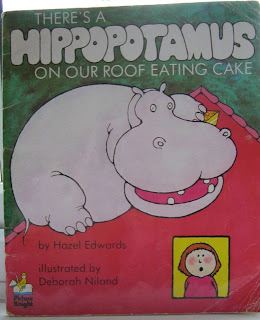 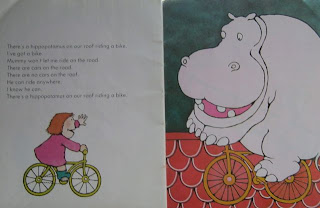 Then things take a slightly sinister turn, and this is probably the most unpleasant picture I have ever encountered in a children's story, the father glaring down and the little girl looking completely miserable and unloved. She draws on her daddy's book with crayons and so he smacks her  ... shock horror! Published in 1980 I guess it predates the shift in societal attitudes which nowadays are very much opposed to corporal punishment by parents.
She comforts herself with the idea of the hippo; "Down here no one is my friend. My hippopotamus lives on the roof. He's my friend. I know. He isn't cross. No one smacks him. He's too big. He can draw anything. There's a hippopotamus on our roof drawing with crayons." 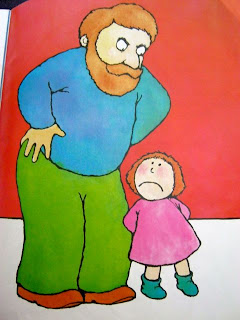 Some men come to fix the leaking roof but the hippopotamus is clever and he sneaks down the ladder while the men have lunch so they don't see him. But he comes back and is bound to be getting up to some more mischief soon. I'm sure we had all sorts of wildlife colonising out house after this story. A real favourite. 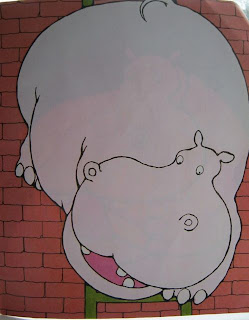 Honourable mention today for Hairy Maclary from Donaldson's Dairy by Lynley Dodd which is a lovely story told in silly rhymes of a doggy outing brought to an abrupt end by a very scary cat.