'The Wild Washerwomen' by John Yeoman has appeared on this blog before but I could not resist writing about it for the A to Z because it is so brilliant. Quentin Blake gets another outing as the illustrator. 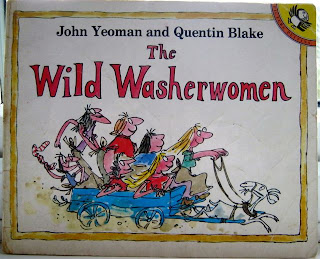 The seven washerwomen work in a laundry for Mr Balthazar Tight (excellent name), but he is really mean and makes them work too hard, so one day they push the mound of laundry on top of him and escape (it seems to be some form of indentured labour because they all live there together too). The years of hard work have made them pretty tough so they run amok amongst the local community creating havoc.
They splash people with muddy water and overturn the stalls in the market. They steal apples from the trees and hats from hat shops, then swing on the church bell ropes and make a terrible noise.

They are so tough no one can stop them. Then a bunch of woodcutters hear the story. They cover themselves in mud and soot to make themselves intimidating, hoping to scare the washerwomen away. However when they come up the mountain path in the goat cart things don't turn out like that.
"But then Minnie realised they were looking at the dirtiest and grubbiest things that they had ever seen in their lives. 'Come on girls,' she shouted. 'Remember you're washerwomen!' "
And they grab the woodcutters and plunge them in the river. "They soaked them and squeezed them and pounded them on stones. They rinsed them and wrung them and laid them out to dry."

And it turns out they weren't such a bad looking load of woodcutters and the washerwomen take a liking to them. So they marry the woodcutters and "after that, people who travelled along the mountain path would see them, all happily washing and woodcutting and having the time of their lives." 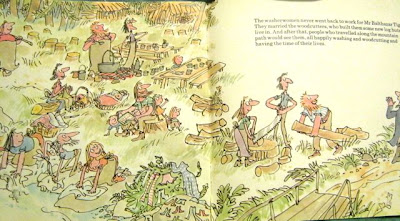