W for Waddell and Wise

As I mentioned earlier in the challenge here is a post for Martin Waddell. His list of publications is pretty extensive and he has collaborated with many different illustrators. Mostly his stories are very gentle and reassuring, perfect for bedtime reads.

I am annoyed at the library for failing me. I requested their copy of 'Once There Were Giants' weeks ago and according to the online catalogue it is sat on the shelf in Wythenshawe but it has not arrived so I have no photos of the story to share with you. This book was always my favourite, though I am not sure if the children were so taken with it. It is the story of a young woman looking at family photographs and watching her own growing up, the 'giants' being the adults around her, and how in the end she becomes one of the giants and has a baby of her own. Just lovely. (Illustrations in this by Penny Dale, who also illustrated another called 'Rosie's Babies' which I love too.) 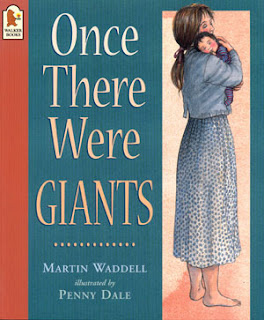 'The Tough Princess' (illustrated by Patrick Benson) is a wonderful role model for little girls too exposed to Disney princesses. Our heroine is Princess Rosamund. Her mother and father are very  poor and they all live in a  caravan, they are worried about their old age and need to marry her off. But instead of fitting in with their plans she grows very tall, beats up the bad fairy and goes off on her bike to find a prince. She has adventures and rescues several "but she didn't like them, so she threw them back".  Eventually she fights through to an enchanted castle and kisses a beautiful prince so it all ends happily, but at least she does it on her own terms. 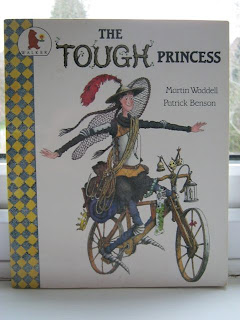 The most beloved of Martin Waddell's books however is 'Owl Babies' (also illustrated by Patrick Benson), and if you have a two-year-old and don't own this yet ...go buy a copy. 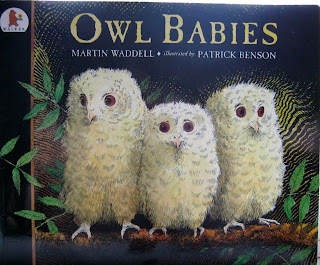 A lovely simple tale of three baby owl, called Sarah and Percy and Bill, who wake up to find themselves alone. A little bit of tension builds as they worry about where their mother might have gone or the things that might have befallen her, but the big sister reassures the little ones and they all sit on the branch awaiting her return. And of course she comes back, "Mummy, they cried, and they flapped and they danced, and they bounced up and down on their branch." The message being that no matter what, mummies are reliable and will always come home. 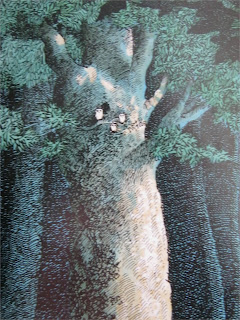 'Ten Sly Piranhas' by William Wise, illustrated by Victoria Chess (hear it read on youtube here). I am just sneaking another one in here under the radar. This book came I think from a library book sale and is a counting book with a tasty twist. 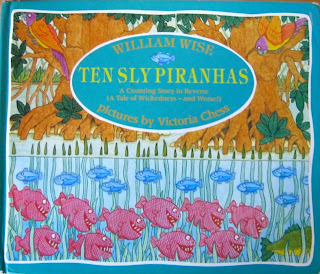 We start the story with ten sly piranhas but there is one really sly one and during the course of the story he manages to sneak up and eat all the others (I mean I'm assuming it's the same one, it might be that several of them eat someone and then they get eaten in their turn). The book is full of these lovely vivid pictures as the river passes through the jungle and we see a vast array of different animals both above and below the water. It puts a slightly more 'friendly' face on a much maligned creature; I saw one once in an aquarium and they really do not look friendly at all. 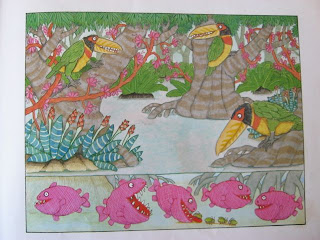