M for Mirinda the Castaway

Jacob had plenty of books that were his, and the chances of finding one for Thymian were pretty slim, so when we came across one for Creature we had to have it. Admittedly I always read this book as 'Mirinda' (that's her name by the way, an Esperanto word that means 'amazing'): 'Miranda the Castaway' by James Mayhew. 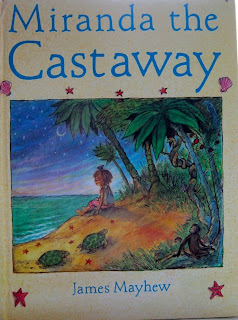 A little girl is cast away on a desert island (she's kind of just there without an explanation of how it happened). When no one comes to rescue her she realises she is going to have to help herself. Now while the scenario could be quite frightening to a small child the pictures are warm and friendly and the aim is to show her being clever and resourceful. First she finds water: 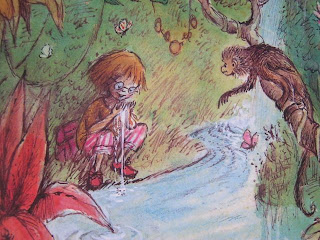 then copies the animals to find food: 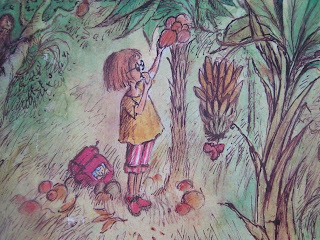 She builds a house for herself and lights a fire with her glasses (any similarities with Lord of the Flies end there fortunately); 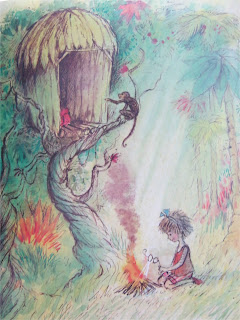 She extends her treehouse and build more rooms, and a system of pipes to bring water from the spring. My mum always objected to this picture (this is the toilet) because under no circumstances should you poop in your water source (in case you should ever find yourself shipwrecked on a desert island): 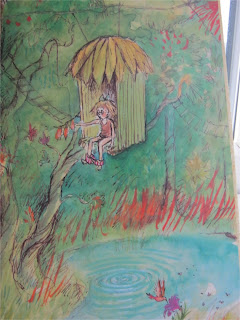 Another slightly suspect one is the garden she starts at the edge of the beach, the soil here would be no good to grow anything, but you get the idea: 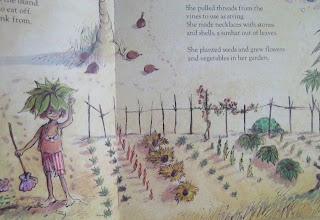 She tries to make friends with the monkeys and the spiders but in the end she decides that although life is pretty good on the island she is lonely and misses people: 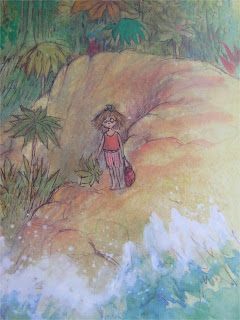 So she builds a raft and sails away 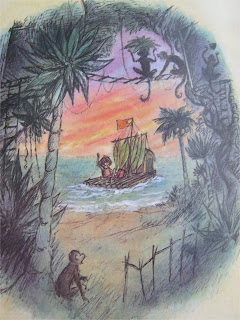 I think that although it is adults that provide the security in life for young children the best stories don't have any, allowing the children to gain some sense that their choices and decisions can have real meaning and impact. While cute animal stories are wonderful I think part of the role of reading stories is to help a child along the path to independence, introducing them to new experiences in a safe way so they can greet experiences in the real world with more confidence.

There are lots of M books and characters but the other that just can't be missed out is Mog the Forgetful Cat by Judith Kerr. I recently bought a copy of 'The Tiger Who Came to Tea', but her books about Mog were regularly in our library pile. I always liked them because it wasn't a cat being like a person but a cat who was always concerned about cat things. 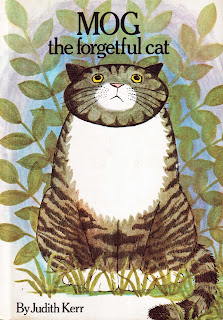 A final M: 'Mole and Troll Trim the Tree' by Tony Johnston and Wallace Tripp that I mentioned back in 2009 and I finally bought a new copy just after Christmas (all ready for next year). 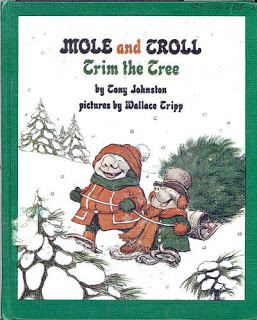