I am going off at a slight tangent today since Roald Dahl strictly writes for a slightly older age group than the other books I have been writing about during my A to Z challenge, but he is so deliciously irreverent that I just had to include him. He knows how to appeal to children in a totally unique way, there are lots of dispicable adults who get outwitted by lots of clever children, but the stories are more complex and not really suitable for the under 5's. Probably after the Narnia books 'George's Marvellous Medicine' and 'The Twits' were amongst the first chapter books that I read to my children. Today however I am writing about the delights of 'Revolting Rhymes'. They are for slightly older children because in order to really appreciate the humour in them you do need to be familiar with the original traditional stories of which these are a rewrite. This is also a return visit for Quentin Blake as his illustrations here really add to the general level of mischief. 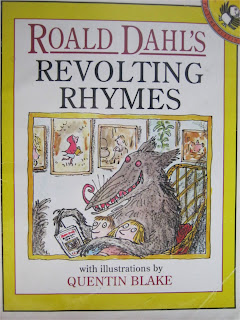 In Cinderella we have the traditional opening with poor Cinders locked in the cellar by her ugly sisters, but things take an unpleasant turn when the Prince comes calling in search of his lady-love and takes a dislike to the ugly sisters and chops of their heads.
"In the kitchen peeling spuds,
Cinderella heard the thuds
Of bouncing heads upon the floor,
And poked her own head round the door.
'What's all the racket?' Cindy cried.
'Mind your own bizz,' the Prince replied.
Poor Cindy's heart was torn to shreds.
My Prince! she thought. He chops of heads!"
And so she asks the Fairy to find her a decent man instead and ends up married to a jam-maker,
"Their house was filled with smiles and laughter
and they were happy ever after." 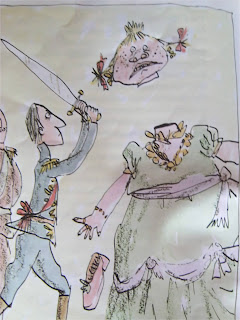 In Jack and the Beanstalk the unpleasant abusive mother berates and harangues her poor son over not just his lack of business acumen but his personal hygiene. The Giant it seems can smell him coming. But she gets her comeuppance when she tries to gather the golden leaves from the beanstalk:
"From somewhere high above the ground
There came a frightful crunching sound.
He heard the Giant mutter twice,
'By gosh, that tasted very nice.'
'Although' (and this in grumpy tones)
'I wish there weren't so many bones.'
'By Christopher!' Jack cried. 'By gum!'
'The Giant's eaten up my mum!'
'He smelled her out! She's in his belly!'
'I had a hunch that she was smelly.' " 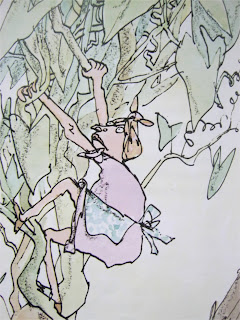 Our favourite was Red Riding Hood where the young girl turns the tables on the wolf very satisfactorily (I guess we're not supposed to sympathise with the wolf at all.)
"The small girl smiles. One eyelid flickers.
She whips a pistol from her knickers.
She aims it at the creature's head
And bang bang bang she shoots him dead.
A few weeks later, in the wood,
I came across Miss Riding Hood.
But what a change! No cloak of red,
No silly hood upon her head.
She said, 'Hello, and do please note
My lovely furry WOLFSKIN COAT.' "
(But we find she's not to be trusted as she makes a return visit in the Three Little Pigs, rids them of their troublesome wolf, but ends the story with a Pigskin Travelling Case.) 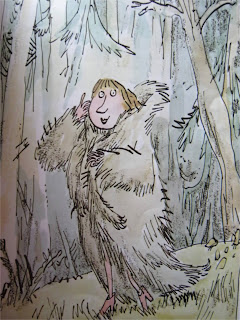 Goldilocks on the other hand has the tables turned on her as the story argues that she is the worst of criminals:
"Oh, what a take of crime on crime!
Lets check it for the second time.
Crime One, the prosecutions case:
She breaks and enters someone's place.
Crime Two, the prosecutor notes:
She steals a bowl of porridge oats.
Crime Three: She breaks a precious chair
Belonging to the Baby Bear
Crime Four: She smears each spotless sheet
With filthy messes from her feet.
A judge would say without a blink,
'Ten years hard labour in the clink!'
But in the book, as you will see,
The little beast gets off scot-free!"
and children should not be encouraged to sympathise with her and the only appropriate punishment is to be consumed by Baby Bear. 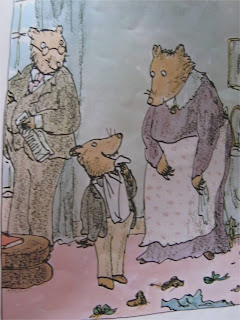