K for Katie and Korky

'Katie Morag and the Two Grandmothers' by Mairi Hedderwick, according to her wiki page, is just one of a series that now runs to fourteen books about this engaging little girl and the community she lives in.

In this story we have the lovely contrast between the two grandmothers; Grannie Island with her welly boots and dungarees, and Granma Mainland who comes with fancy hats and perfume. Apparently the island grandparent was initially going to be a grandad but in the end she turns out to be a great role model of strong, self-reliant womanhood. Katie Morag loves them both but you get a sneaky feeling that her loyalty really lies with island life. 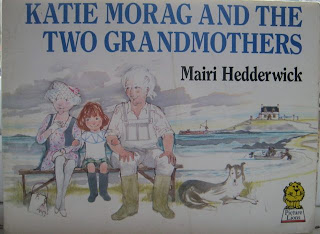 What is so lovely about these books is the complete little community that Mairi Hedderwick has created for her characters. Inside the front cover of each book is this drawing of the bay where they live showing the homes of the people who appear in the stories. There is a matching one inside the back cover with the village in darkness at the end of the story:

So the island is having it's annual Show and everyone is getting ready for it. I love the mass of detail in each of the pictures, people busy going about their daily lives, the whole thing has such a wonderful atmosphere. (I guess it is a slightly naive and idealised view of isolated rural existence but I don't think there's any harm in longing for a simpler life.) 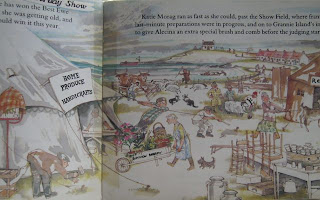 Grannie Island's prize sheep gets in a bit of a mess so between them she and Katie Morag manage to give her a wash and brush up in the family bathroom so she can win the competition. Everything about these books is lovely, just every day stories about the trials of growing up, but also giving children a picture of island life, for most children probably very different to their own. 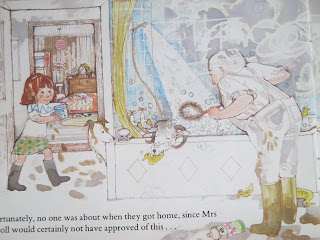 Today Katie Morag has to share her post with Korky Paul, probably most famous for his illustration of Winnie The Witch (with Valerie Thomas), which was on the list but really there were too many I wanted to write about. Creature has her own personal drawing of Winnie, done for her by Korky Paul himself when she went to a book signing: 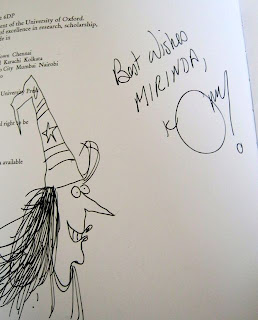 Instead I am going to give a quick mention to 'The Fish Who Could Wish' (with John Bush), the ultimate story of be-careful-what-you-wish-for. We had a CD-ROM game of this book that the children all loved. 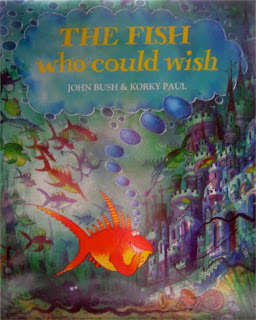 And the inimitable 'Professor Puffendorf's Secret Potions' (with Robin Tzannes) in which Professor Puffendorf goes out and her lazy grumbling assistant Enzo decides to test some of her secret potions on her unsuspecting guinea pig named Chip. Little does he know that Chip is a lot smarter than you might imagine and the outcome of the evening takes an unexpected turn. Creature learned to count to five from reading this book. I think it was a charity shop find and it rapidly became a most requested book. 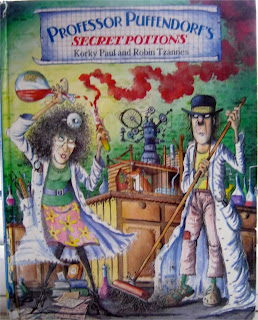