S for Sid and Sendak

'Six Dinner Sid' by Inga Moore apparently won the Smarties Prize in 1990. She is not a prolific writer and has spent much of her career working on illustrations for classic children's books like 'Wind in the Willows' and 'The Secret Garden'.

I tend to think you are either a cat person or a dog person (apart from those people who don't like having animals around at all) and our family were definitely cat people. Unlike dogs, cats are pretty fickle creatures, if they deign to come home in the morning for breakfast you feel quite grateful. In Six Dinner Sid we have a cat who really does play the game well and strings along a whole street full of 'owners'. 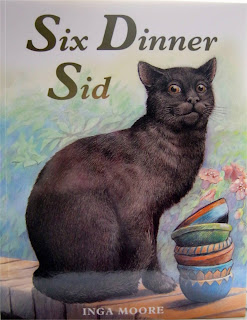 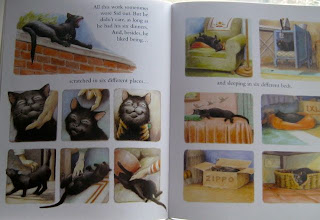 "Since no one talked to their neighbours in Aristotle Street, no one knew what Sid was up to. They each believed the cat they fed was theirs, and theirs alone."
Unfortunately for Sid he gets a cough and ends up with six visits to the vet ... and so his cunning scheme is discovered.
"When they discovered what he had been up to Sid's owners were furious. They said he had no business eating so many dinners. They said, in future, they would make sure he only had one dinner a day." 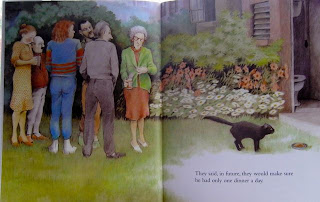 But Sid is a cat, a six-dinner-a-day cat. If he was a dog he would have just sulked in the corner. Being a cat he has his own plans. So he moves house.

"Unlike Aristotle Street, the people who lived in Pythagoras Place talked to their neighbours. So, right from the start everyone knew about Sid's six dinners. And because everyone knew, nobody minded."

There are a few classics that just cannot be omitted from any perusal of children's picture books and Maurice Sendak's 'Where The Wild Things Are' is one of them. It has everything really, fantasy and imagination, a child protagonist who gets to be king of his own land and faces up to the scariest of monsters. 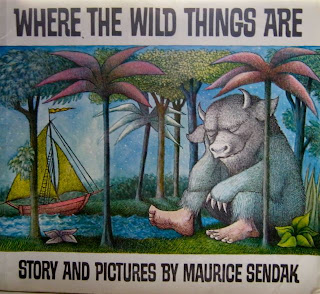 I always felt it was a story that allows children to express their anger, to be wild. Max goes off to where the wild things are and is the wildest one of all. But then home is still a safe refuge, and when he decides he's had enough of being wild and he comes back his supper is waiting for him. 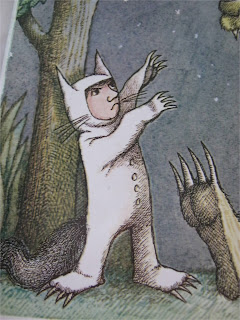 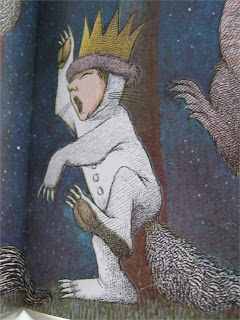 Linking back also to my review of The Sad Book by Michael Rosen.