N for Not Now Bernard

'Not Now Bernard' by David McKee is a book that subverts all the conventions, in the same way that Hitchcock's Psycho did, yet both succeed as stories.

Our protagonist announces to his mother, "There's a monster in the garden and it's going to eat me", and he then goes into the garden to face his destiny. Fortunately he is not really in the story long enough for anyone to strongly identify with his character.
The monster makes very short work of eating Bernard, it's the parents he has more trouble with.
None of my children ever seemed to have much sympathy with poor Bernard; it seemed that if he was stupid enough to go out there even when he was aware of the monster's intent, then he deserved to be eaten.
It is a tale of parental indifference, and we never had much sympathy with the parents either, in fact you can't help but side with the monster. This is another clever twist since they are invariably the baddies in any story. 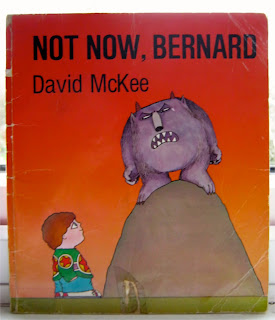 The monster has about as much luck in attracting the parents attention as poor Bernard did, roaring at his mother and then biting his father: 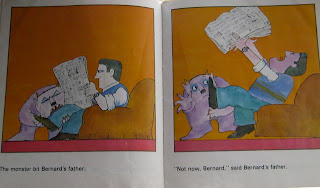 Then he eats Bernard's dinner, reads one of his comics and breaks one of his toys (the frustration is beginning to show): 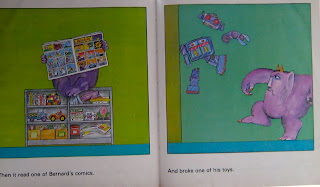 With not even a blink of acknowledgment the mother sends him off to bed with a cup of warm milk. The monster is utterly disarmed by their failure to notice the fact he has taken Bernard's place.
"But I'm a monster" says the monster at the end.
"Not now Bernard," says his mother. 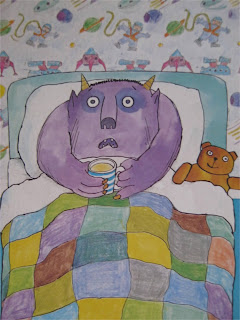 McKee is perhaps best known for Elmer the Patchwork Elephant, which we also enjoyed, though Elmer's further adventures mostly came when we had moved on to more involved stories. He is an interesting writer because he tackles themes like diversity and racism in a way that is understandable to young children. I also remember we had one called 'Two Monsters' about two monsters that lived on opposite sides of a mountain and communicated through a hole in the mountain.