D for Dr Seuss (who else)

It's funny how books can feel familiar without any specific memory of having read them before. The Cat in the Hat was like that for me when my children were little; I already knew it but was not sure how. I did debate the idea of doing my entire A to Z challenge on Dr Seuss, he certainly has enough books and enough crazy titles to cover all the letters of the alphabet. 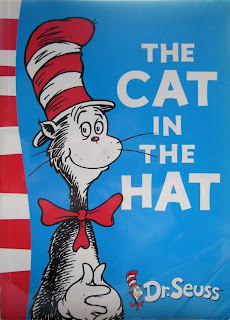 My favourite thing about Dr Seuss is his sheer exuberance and imagination. He understands something about the way children think and at the same time manages to take on their way of seeing the world, a rare quality in adults. He invents animals by the score and then invents wonderful names for them. He invents new nonsense words any time he needs a rhyme and there isn't one. Most of his books have a story line but others for very young children are much more a matter of playing with words.
A book like Hop on Pop is meant partly as an early reader, with large simple words at the top of the page, then the same words put into a rhyme: 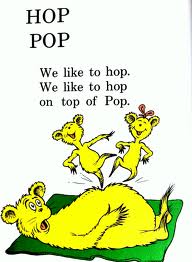 and others like One Fish Two Fish Red Fish Blue Fish: 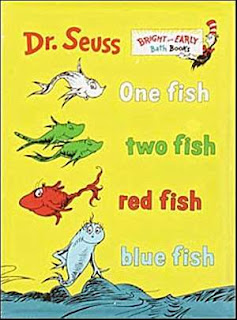 We moved on to books like I Can Lick 30 Tigers, in which an unfortunate cat has to back down in the face of real tigers, though the favourite tale in this book is King Looie Katz which is about egalitarianism and everyone being responsible for their own tails: 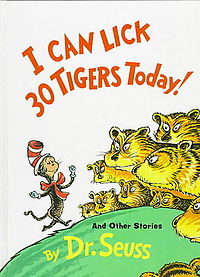 The Lorax was one of the first Seuss books we owned. Many of his stories have a message or even a political point, but this is probably the most vociferous; I always used to linger over the moment when there is a sickening thwack and the last truffula tree is chopped down. I have not seen the film and have no desire to after the hatchet job that was done on The Grinch; the stories are wonderful and complete in themselves they do not need the embellishment necessary to turn them into a full length film: 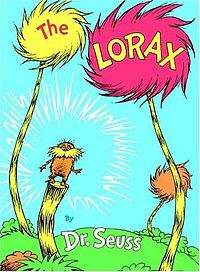 However hard it might be to have a favourite Dr Seuss book mine will always be The Sneetches: 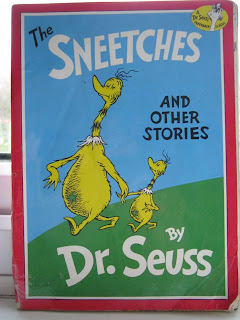 Here are the poor starless Sneetches, sitting on the beaches and watching the star-bellied Sneetches having frankfurter parties and marshmallow toasts. It's a fairly no-nonsense message about prejudice and how meaningless it is, and also partly I always felt about how there's always someone out there able to make money out of stupid people. For the grown up reading it makes it more enjoyable if the story has  bit of something going on alongside the silliness: 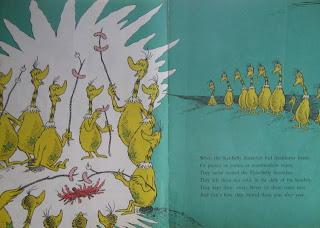 My favourite story in the book however is 'What was I scared of?' about a little person who meets this strange and slightly ghostly empty pair of trousers and, 'in a dark and dreary snide field' is forced to confront his fears. 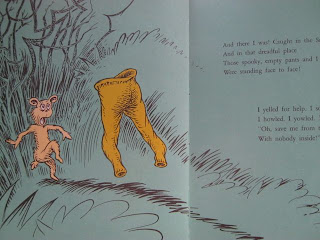 Dr Seuss is utterly unique as a children's writer and unmatched in my opinion. I have not encountered all his books but have never read one that I have not loved.

(Click here for other mentions of Dr Seuss on this blog)
(Go to the list here and visit other A to Z Bloggers.)
Posted by martine at 08:00